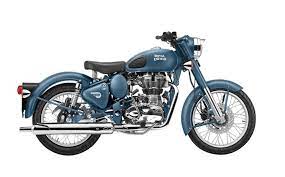 Royal Enfield launched the Classic 500 in the Indian market back in 2009. The motorcycle maintained the signature retro design of the Bullet, but was refined for the modern era. Loaded with features like a unit-construction engine (UCE) and electronic fuel injection (EFI), the motorcycle took a large step forward in terms of technology.

Although the Classic 500 has been discontinued in India now, it used to be a fairly popular motorcycle when it was on sale in our market. Of course, plenty of modified examples of the bike roam around the streets of India, some of which are extremely pretty-looking, just like the one we have here. This here is an RE Classic 500-based scrambler, built by Bulleteer Customs of Bengaluru. This motorcycle has been nicknamed El Luchador, which is Spanish for ‘the wrestler’.

The bike has been built to handle the urban jungle as well as occasional off-road rides. There are plenty of noteworthy changes to the design here. At the front, we see an aftermarket LED headlamp, along with a LED turn indicators, and the stock instrument console has been replaced by a new semi-digital unit.

A taller handlebar has been added here, along with new rear-view mirrors. The fuel tank gets a beautiful dark green and red paint, with golden pinstripes and custom logos. The same paint job also extends to the front and rear fenders. The motorcycle gets a ribbed single-piece seat, seemingly made of tan leather, with a tiny aftermarket taillight at the end.

The airbox and side boxes also feature custom logos, which look quite cool. We also see gas-charged shock absorbers at the rear, with golden-painted canisters. The motorcycle gets wire-spoked wheels on both ends, which are shod with block-pattern tyres. Also, the numberplate holder has now been mounted on the left swingarm.