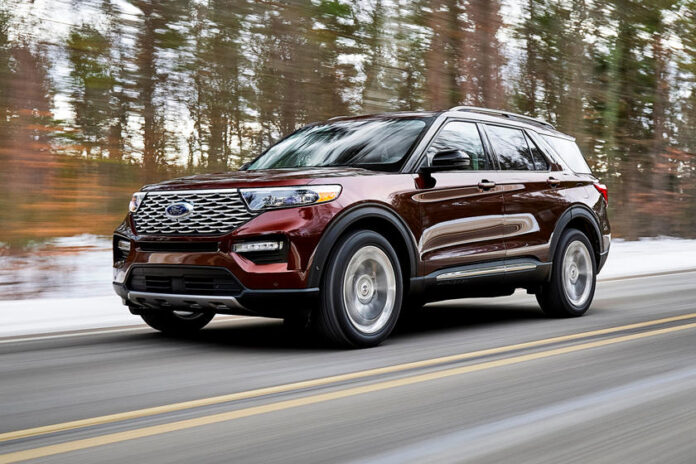 Ford, in partnership with Jiangling Motors Corporation, will soon launch a new three-row SUV in China, named ‘Equator’. This upcoming SUV will sit above the Everest (known as Endeavour in the Indian market) in Jiangling-Ford’s lineup. Recently, new spy pictures of Ford Equator have emerged online, which show the vehicle in a production-ready version. The exterior of the upcoming Ford Equator looks quite imposing, which gives it great road presence.

The front end sports a massive grille, which is flanked on both sides by LED DRLs and turn indicators. The main headlamps, consisting of LED projector lights, are integrated into the bumper. There’s a healthy smattering of chrome on the grille and front bumper, which adds to the visual appeal. The side profile is rather simple, with a large glass area and strong shoulder-line. The windows get chrome outlining, and the door cladding gets chrome embellishments. The taillights are sharp and sleek, and there’s an ‘EQUATOR’ badge on the tailgate, right below the blue oval logo. The rear bumper gets a prominent faux bash plate, with integrated dual exhaust vents.

The SUV gets black plastic cladding on the wheel arches and bumpers, along with a pair of silver-finished roof rails. As for the interior, it looks extremely premium and upmarket. The cabin gets a white and peach colour scheme, with generous use of leather on the seats, door panels, and dashboard, along with wood inserts on the dash and centre console. The highlight of the cabin is the dual-screen setup; the fully-digital instrument console and the infotainment touchscreen sit together in a joint housing. The same setup has also been spied on the next-generation Mahindra XUV500. Ford’s upcoming C-SUV for India, which is being jointly-developed with Mahindra, will likely get the same dual-screen setup.

The spy pictures show captain seats in the second row, which would make this a 6-seat SUV. We expect a 7-seat model to be available alongside, with a bench seat in the second row. Powering the Ford Equator will be a 2.0-litre, inline-4, turbocharged petrol engine, which can develop a peak power of 224 PS. Upon launch, expected in the first half of this year, it will compete against Hyundai Palisade and Jeep Grand Commander in the Chinese market.