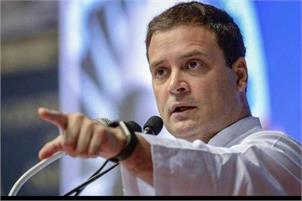 As polling began for the second phase of the Bihar Assembly election, Congress leader Rahul Gandhi on Tuesday urged people to vote so that a new government of their choice can be formed.

Taking to Twitter, the former Congress chief said he will be in Bihar’s Korha and Kishanganj on Tuesday and will talk about issues such as “growing unemployment”, problems faced by farmers and a “weak economy”.

“Some districts in Bihar will be voting in the second phase of the polls. Do vote, so that a new government of your choice is formed,” Gandhi said in a tweet in Hindi.

The second of the three phases of Bihar Assembly polls is being held on Tuesday in which over 2.85 crore voters are eligible to decide the fate of nearly 1,500 candidates.

Voting will take place in 94 assembly segments, more than a third of the 243-strong assembly spread across 17 districts.

READ  After Historic Win, Biden Pledges To Be "President Who Seeks To Unify

“I Am Confident He Knows He Hasn’t Won”: Joe Biden On Trump