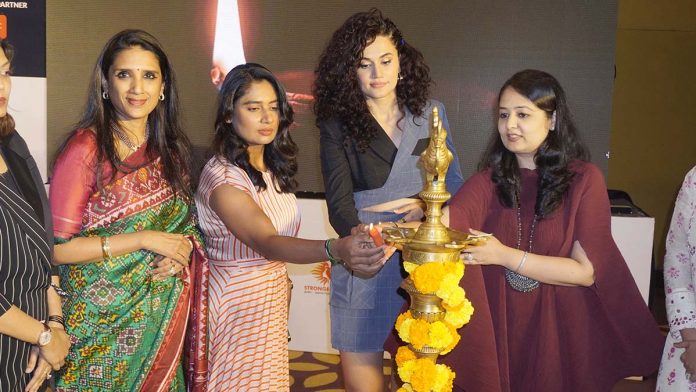 Hyderabad, July 13, 2022….The films no one does, come to me. It may be because of several
reasons. Or maybe because of the snowball effect of characters I portrayed in earlier
movies. Whatever may be the reason, that fact is that the roles other actresses are scared of
doing land in my lap said Software Engineer turned actress Taapsee Pannu said while
interacting with Ms Shubhraa Maheshwari, Chairperson of FICCI Ladies Organisation (FLO)
Hyderabad Chapter.
Taapsee Pannu and Mothali Raj, the face of Indian Women Cricket were in a conversation
with Shubhraa Maheshwari in a session held in The Park in the city on ‘Women in
Sports—Struggle and Success”. It was a well-attended session, more than 200 FLO members
assembled to listen to two distinguished women sports personalities.
Welcoming the gathering Shubhraa Maheshwari said the will to prepare for winning,
matters the most. These two are incredible sportswomen in India. Their respective journeys,
struggle, and achievements are a great inspiration to many.
I am always very frank in revealing my mind. This frankness, my honesty is very well
received in the industry. It also landed me many good roles Taapsee said.
If you want to achieve what you have not achieved before, you must do what you have not
done before. This has been my funda. And I am good with what I have got so far, she shared.
I make the most out of my life. I am an open book. There was no fear to fail because I
started from scratch. I was new to the craft. I did not know acting before. I learned
everything while doing it. Even for the coming film, I learnt cricket. Cricket is something new
to me. I didn’t lift a bat ever in my life. I give my best in whatever I do. If you pull me down, I
bounce back, Taapsee told her audience.

I speak out my mind in public, about what I feel strongly about anything, be it menstrual
hygiene or problems confronting the nation. Why shy and shun away. I prefer being there
and making my voice heard, Taapsee said.
Mithali being one of the early women cricketers in the country didn’t have any mentors to
look up to. I mentored myself. When I had to take tough decisions in the field my father
used to help me. He was like a mentor there for me. My father was more of a cricketer than
a friend in guiding me through the sport.
I picked up the sport watching my brother play. It was tough to convince my parents as it
was known those days as a gentlemen’s sport. People didn’t recognise the sport. There was
no money. Knowing well that it was an unknown sport I ventured into it was an adventurous
decision. I am big on my commitment and sincerity for the sport, she said.
The media played its role in popularising women’s cricket. Televising the matches earned it
recognition, she added.
Mithali’s journey in the sport made the sport a viable career for women. She asked mothers
to encourage their daughters to pursue the sport of their choice. Women cricket must be
celebrated she said. The forthcoming movie Shabaash Mithu is going to do just that she
said.

Get Ready for An Insightful Journey with ‘James Webb: The $10 Billion Space Telescope’this August