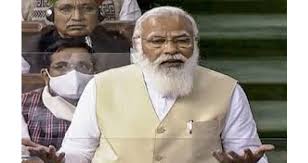 The protests started as the Prime Minister, after speaking of Covid 19, switched to farm laws, saying, “This government and the Parliament respects farmers and will always continue to respect them”. The opposition which has shredded him over the last two days for comments like “Andolanjeevi” and “parjeevi (parasites)” made during his last address, broke out in protests. As Speaker Om Birla repeatedly asked the members to calm down, PM Modi said, “The farm laws will not bring down any farmers. No mandi has been shut or Minimum Support Prices have been stopped”.

“Minimum Support prices have been increased after the farm laws were formed. Moreover, farmers can now sell their goods wherever they want,” he added.

Admitting that change will “always raise doubt”, he tagged it with the “andolanjivi” jibe —  the one that was adopted as a badge of honour by many in parliament, including the Congress’s P Chidambaram.

Ms Badal — a former minister who quit PM Modi cabinet over the farm laws — had given a fiery speech in parliament yesterday.

There were strong words for the Congress, which the BJP has repeatedly accused of instigating farmers. “No matter how much you try to sabotage it, you will fail to do so, because the truth is out there, that the farmers have not lost anything since the laws came into effect,” PM Modi said without naming the Congress.