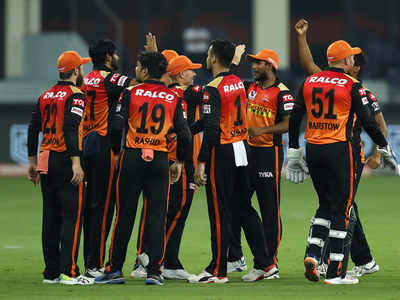 SunRisers Hyderabad fed off a 160-run opening stand between skipper David Warner and Jonny Bairstow and then Rashid Khan’s immaculate lines with the ball as they beat Kings XI Punjab by 69 runs in Dubai on Thursday. Bairstow narrowly missed out on a second Indian Premier League (IPL) century, scoring 97 off just 55 balls and combined with Warner, who smashed 52 off 40, to score the bulk of the runs as SRH finished on 201/6. In reply the fabled top-two of Punjab, captain KL Rahul and Mayank Agarwal, didn’t fire and despite Nicholas Pooran’s breezy 77 off 37 they were dismissed for 132 in the 17th over.

Rahul (11) and Agarwal (9) were both dismissed inside the first seven overs as Punjab found themselves 58/3 and behind the asking rate.

However, Pooran tried to take the attack to the Hyderabad bowlers and added 47 for the fourth wicket with Glenn Maxwell (7).

28 of these runs came off Abdul Samad as Pooran smashed the leg spinner for four sixes and a four in one over as Punjab looked firmly in the contest at 91/3 at the end of nine.

But two quiet overs from Rashid Khan and T Natarajan – Hyderabad’s top two wicket-takers so far this season who stepped up in the absence of Bhuvneshwar Kumar – led to Maxwell’s run out before Mandeep Singh (6) was bowled through the gate by Rashid to reduce Punjab to 117/5 in the 13thr.

Realme 8 quick review: Its sci-fi design will attract you