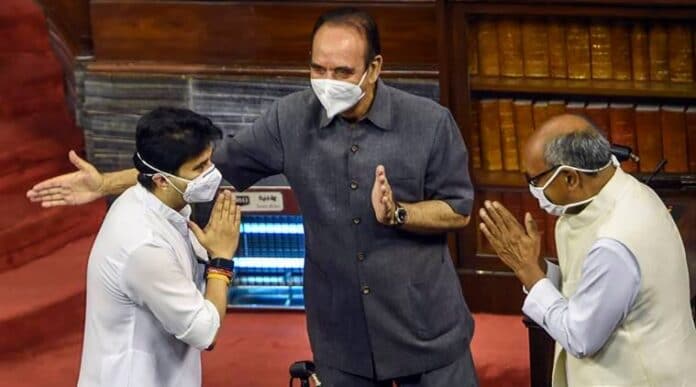 An exchange between BJP leader Jyotraditya Scindia and his former Congress colleague Digvijaya Singh made for an amusing interlude in the Rajya Sabha today, in the middle of a discussion on the farmer protests.

Jyotiraditya Scindia, speaking in parliament for the first time since his crossover last year from the Congress – his party of 19 years – to the BJP, targeted what he called the double standards of the Congress-led UPA government on the farm laws at the centre of a massive farmers’ agitation outside Delhi. The Congress and other opposition parties have supported the demand of farmers that the laws be repealed. Mr Scindia sought to highlight what he alleged was the Congress’s flip-flop on the laws.

“In the 2019 election manifesto, the Congress had promised reforms for farmers. In 2010-11, our Agriculture Minister Sharad Pawar had written to all Chief Ministers and said that private sector participation was necessary in agriculture and for that, amendments were needed in the APMC (Agricultural Produce Market Committee) Act enacted by state governments,” Mr Scindia said.

“We have to change this habit of changing our stance. We can’t have it both ways – how long can this go on?”

Speaking right after Mr Scindia, Congress veteran Digvijaya Singh began by taking a swipe at him.

Punjab imposes lockdown-like curbs till May 15; check out what’s allowed, what’s not

‘Looking at what we can do to help, support India,’ says Boris Johnson