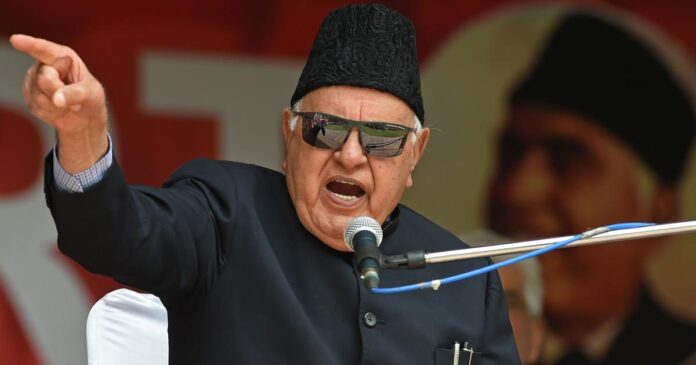 The flag of the erstwhile state of Jammu and Kashmir’s will be used by the coalition of all major regional parties which aim to have its status and powers restored, the bloc announced on Saturday. The group will be led by former Chief Minister Farooq Abdullah and rival Mehbooba Mufti will be his deputy.

The “People’s Alliance” is an unprecedented grouping of parties which signed last year’s Gupkar Declaration just before the centre struck down Jammu and Kashmir’s decades-old special powers listed in Article 370 of the constitution and split it into two union territories.

The leaders, who buried years of bitter rivalry to ally, met at the residence of People’s Democratic Party chief Mehbooba Mufti for the first time after its formation on Saturday.

National Conference leader Mr Abdullah, 83, was unanimously named chairman of the group while Ms Mufti will be its vice-chairman. Left leader Mohammad Yousuf Tarigami is the convenor of the alliance, while Sajad Lone of the People’s Conference has been named as the spokesperson.

“I want to tell you that it is false propaganda by the BJP that the PAGD (People’s Alliance for Gupkar Declaration) is anti-national. I want to tell them that this is not true. There is no doubt that it is anti-BJP but it is not anti-national,” Mr Abdullah told reporters after the meeting.