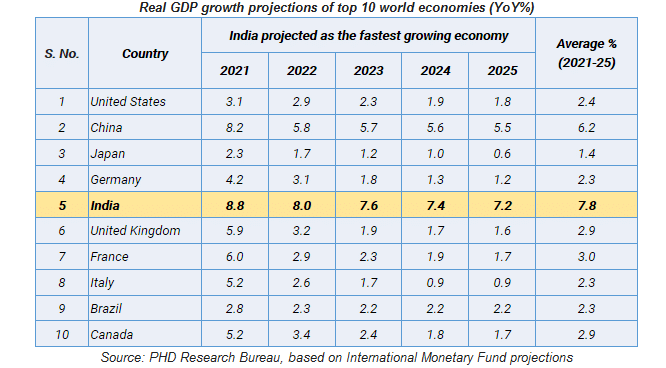 While appreciating the dynamic reforms undertaken by the Government during the last 7 months to mitigate the daunting impact of pandemic COVID-19 on trade and industry, Shri Sanjay Aggarwal, President, PHD Chamber of Commerce and Industry, said in a press statement issued here today that the economy is going to attain its fastest growth trajectory from the next financial year 2021-22 onwards.

According to the recent growth estimates by the International Monetary Fund (IMF), India is projected to become the fastest growing economy among the top 10 major economies in the world economic system from  2021 to 2025.

Percolation of more and more economic reforms at the ground level with effective implementation would be crucial to attain the potential trajectory of US$ 5 trillion in the next 6 financial years by FY 2026-27 (GDP at current prices; considering the exchange rate between 74-75), said Shri Sanjay Aggarwal.

On the back of various  reforms undertaken by the Government,  economic recovery has become visible in the high frequency  economic and business indicators of the recent months. Recently, PHD Chamber on the basis of PHDCCI Economic and Business Momentum (EBM) Index, estimated that the GDP growth will be at around (-) 7.9% for the current financial year 2020-21 as compared with the median forecasts of (-) 9.3% by various national and international forecasting organizations, said Sh. Sanjay Aggarwal

At this juncture, demand creation measures are needed to attain a positive growth trajectory sooner rather than later, said Shri Sanjay Aggarwal.

Demand creation along with increased spending on infrastructure will have multiplier effects on the economic growth trajectory by boosting private investments, creating new employment opportunities in the country, generating demand for commodities such as steel, cement and power, said Shri Sanjay Aggarwal.

The planned Rs 111 lakh crore investment in the National Infrastructure Pipeline (NIP) has a great potential to boost the GDP growth of the country as correlation between the investment in infrastructure and economic growth is quite high, said Shri Aggarwal.

For this purpose, the Government can consider raising investment funding through borrowings from overseas markets by issuance of overseas bonds through an SPV that could act as a mega Development Financial Institution- DFI, said Shri Aggarwal.

Overseas borrowing will bring in diversification in the Government borrowings and will significantly reduce the dependency on the domestic market. This will allow leaving more room for private sector to raise capital for investments, said Shri Aggarwal.

In the past, Governments of various countries have often used DFIs to fund industrial and infrastructure investments. DFIs help in efficient and timely infrastructural development in a country through effective financial as well as technical support, said Shri Aggarwal.

We have a large chunk of foreign exchange reserves of USD 555 billion as of October 2020, part monetisation of which could become another way to promote greater infrastructure development in India at a faster pace after due diligence and proper safeguards, said Shri Aggarwal.

Focus is required on further reducing the cost of doing business in the country including the costs of capital, costs of compliances, costs of logistics, costs of land along with the availability of land and flexibility in hiring the  work force vis-à-vis flexible labour laws, said Shri Aggarwal.

This will help in enhancing the cost competitiveness and creating a level playing field for domestic businesses enterprises, attracting large chunk of foreign and domestic investments, boosting industrial activities and creating tremendous employment opportunities for the growing young work force in the country, said Shri Aggarwal.

Going ahead, need is to sustain the reform momentum set by the Government, ensure effective implementation of the reforms at the grassroots level and enhance the synchronization of policies between Central and State Governments, said Shri Aggarwal.