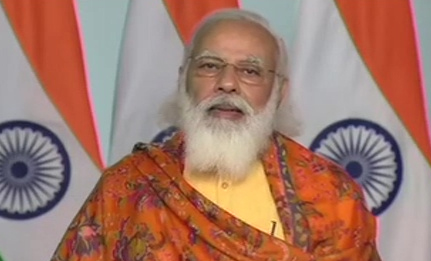 Prime Minister Narendra Modi today said there would be more Made-in-India vaccines soon as the country continued to save lives by exporting medicines and vaccines.

“India has in these times of crisis fulfilled its global responsibilities from the beginning by setting up infrastructure related to vaccination. So far only two made-in-India vaccines have been introduced, but in the future many more vaccines will be made available,” PM Modi said, addressing a virtual meeting of the World Economic Forum.

Despite dire predictions, said the Prime Minister, India beat all odds in the global fight against the coronavirus.

“Last year, in February-March, a lot of experts had said the India will be the worst-affected country, there will be tsunami of cases. They predicted 2 million deaths in the country. But India moved ahead with a proactive public participation,” said the PM.

“Today, India is among countries that have succeeded in saving the maximum lives. The country, which comprises of 18% of the world’s population, has saved the world from disaster by bringing the situation under control.”

“Upcoming vaccines will help other countries at a swifter pace to fight the pandemic,” he added.

Women’s Day 2021: Here are some apps that have women playing a key role

Real Estate Akhil Gore - March 8, 2021 0
Gurugram has always been one of the major contributors to NCR's growth in the real estate sector, and Sohna Road is a perfect example...

Featured Akhil Gore - March 8, 2021 0
Xavier School of Management, in its endeavour to Powering Women of the Nation, is setting up the Centre for Gender Equality and Inclusive Leadership at Delhi-NCR Campus to make a...

Entertainment BFN's Desk - March 8, 2021 0
Aquatic shows have become an order of the day in planning for events, whether for individuals or a crowd for parties, gatherings, and festivities....

XLRI sets up a Centre for Gender Equality and Inclusive Leadership...