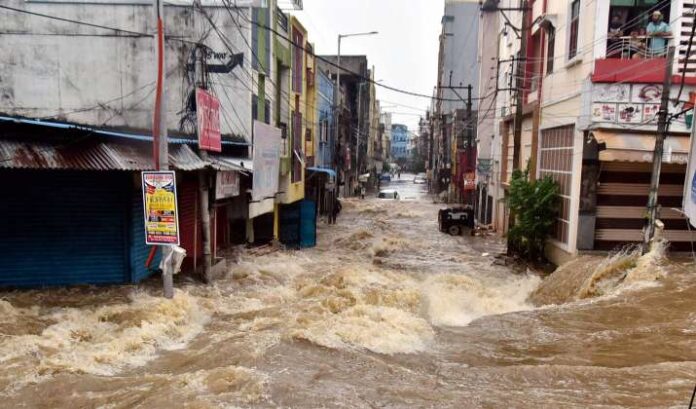 Frightening visuals showed vehicles being swept away as streets got submerged in water, and massive downpour caused huge damage in the state capital and nearby areas. This morning, videos showed people on their rooftops after floodwater entered their houses.

In a minute-long clip, an auto rickshaw and a car were seen being swept away as locals tried to stop the vehicles from being washed away. Another dramatic visual from Abdullapurmet, on the outskirts of Hyderabad, showed a car at a flooded street being pulled away.

Some areas in the city received more than 150 mm rain through the day, just a little short of the 190 mm reported on Tuesday.

The Disaster Response Force (DRF) personnel of the Greater Hyderabad Municipal Corporation (GHMC) were continuously working on the field clearing water stagnations and inundations and all possible measures were being initiated in view of the rainfall, Vishwajit Kampati, Director, Vigilance and Disaster Management of GHMC, said in a tweet.

Shopping Ravindra Soni - October 27, 2020 0
Finance Minister Nirmala Sitharaman on Tuesday said that demand for consumer goods has picked up during the festival season, which runs from...

Entertainment Ravindra Soni - October 27, 2020 0
Megastar Amitabh Bachchan says he is thrilled that the city of Wroclaw in Poland has named a square after his late father...