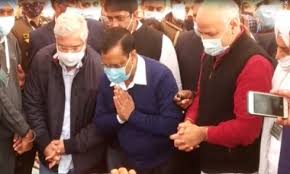 The Aam Admi Party (AAP) today alleged that Delhi Chief Minister Arvind Kejriwal has been placed under house arrest by Delhi Police since Monday, particularly in the wake of his visit to the Singhu border on Monday and the Bharat Bandh called today by farmers protesting against the new central agricultural laws.

The party said that under the Union home ministry’s orders, the police have got the three mayors of Delhi’s various municipalities to protest before the Chief Minister’s residence, creating a pretext for his detainment. Mr Kejriwal’s residence has, thus, been barricaded completely, with none allowed to enter or leave the premises.

All of his official meetings have been cancelled for the day given the circumstances, AAP officials said.

Mr Kejriwal had visited the Singhu border point between Delhi and Haryana on Monday to meet the protesting farmers and enquiring about their welfare. Thousands of farmers have been parked there, along with other border points with Delhi and other states, in protest against the central government’s far ordinances passed in September.