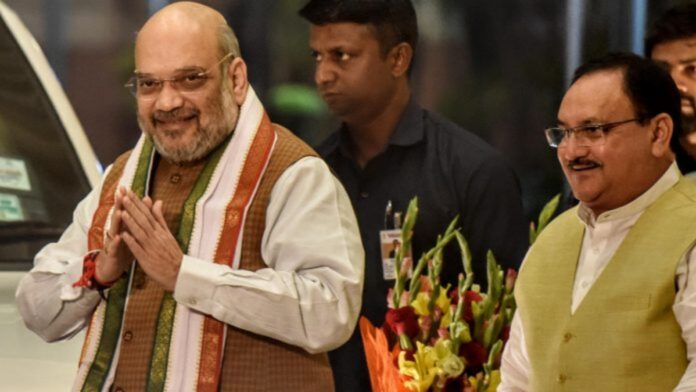 Union Home Minister Amit Shah, in Hyderabad on Sunday to campaign for next week’s municipal election, highlighted the floods that brought the city to a standstill last month, and asked voters for “one chance” to show how the BJP could change the city for the better, and take it from “dynasty to democracy” and from “corruption to transparency”.

Addressing a public rally on the final day of campaigning, Mr Shah also said the BJP wanted to “rid Hyderabad of the Nawab-Nizam culture”, would not tolerate “appeasement of any community” and would ensure “no one will be a second class-citizen”.

“If you give the BJP one chance, we will remove all illegal construction which blocks water exits and make sure the city never gets flooded again,” he said, attacking Telangana Chief Minister K Chandrashekar Rao, or KCR, over his government’s handling of the situation.

“We follow the news as well. We did not see the Chief Minister oversee rescue operations or meet with officials or do on-ground inspections with MLAs. Where was he when Hyderabad was drowning?” Mr Shah asked.

“We will take Hyderabad and Telangana from dynasty to democracy, from corruption to transparency. No one will be a second-class citizen. There will be no appeasement of anyone,” he added, before training his guns on the ruling TRS’s “ilu, ilu” with Asaduddin Owaisi’s AIMIM.

“We don’t mind if the TRS is friends with AIMIM but why are they not open about it? Why do they do ilu, ilu (an abbreviation for “I love you”) behind closed doors?” he asked.

The BJP has blamed an “unholy alliance” between the TRS and AIMIM, which beat either the party or an ally to five seats in the Bihar election, for Hyderabad’s lack of development, accusing them of banking on votes from “Rohingya and Pakistani infiltrators”.

When asked to respond to jibes by TRS leader KT Rama Rao and Mr Owaisi over these claims – that as Home Minister he needed to take action – Mr Shah said: “But they never let me take action. They create a ruckus in Parliament when we want to take action.”