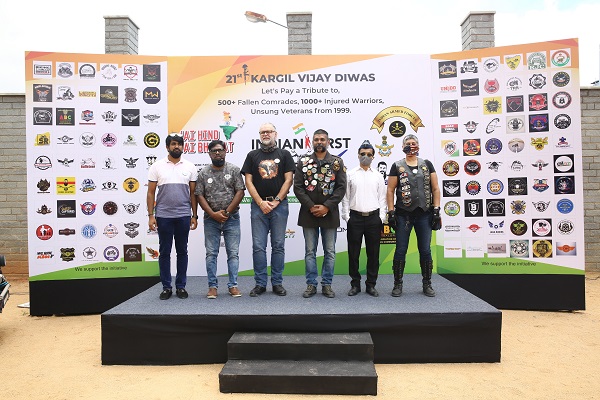 Bengaluru, July 2020: Umesh Gopinath Jadhav, founder of Muzicause (a music band for a cause) started his first historical road trip to meet families of martyrs (Fallen heroes), Veterans & Serving officers of Armed forces & Para-military forces across 28 States & 9 Union Territories. His objective was to build patriotism among the people, especially the youth by creating a map of India in Jammu and Kashmir with the collected soils of the martyrs. Umesh’s mission was completely supported through a crowd funded project which mainly consisted of bikers who helped him with his travel expenses.

Big Biking Commune, largest aggregator platform for the biking community stepped in to support Umesh Jadhav’s patriotism towards the unsung Kargil war heroes of 1999, where he had collected the soil of 70 martyrs who had given their blood and soul to save our nation.

Seeing the patriotic light in the heart of the bikers, Mr.Arun Kumar, Convener, Big Biking Commune, stepped in by making it a point to amplify the patriotism among the people in our nation by bringing in all the bikers and the jeep lovers to an event organized in remembrance of 21st Kargil Vijay Diwas which was held on 25th July (Saturday) in support of Umesh Jadhav’s initiative. “We believe that we have the ability to maximize patriotism among bikers, since the reach under our biker commune is humungous. As bikers we are able to travel around the country, while the borders are protected. We feel happy to be a part of this journey and we wish Umesh the best in completing his mission,” adds Mr Arun.

The event had Brigadier Bhupinder Singh Kang and Retd. Col. Tapash Kumar Basu, who had enlightened the bikers about how brutal & courageous the Kargil war was and paid a tribute of silence to the souls of the fallen heroes, along with it the admins of premium bikers & Jeep clubs from Bangalore consisting of Harley Bangalore Chapter, Association of Biking Community, Sir Group, Biking Buddies, RD 350, Rider Republic, Jeep Mudsters.

“Keeping in mind about Covid-19, the gathering had 80-100 bikers with all safety norms in place. The clubs admins were pleased with our method of social distancing and following the norms completely. As the largest aggregator platform in the biking community, our doors at Big Biking Commune are always open to structure any positive initiatives.” added Mr Arun

Umesh Jadhav was thankful to the Big Biking commune for organizing the meet, and helping him to maximize his message across the biking community.

READ  Okinawa Scooters inaugurates its dealership in the capital – Delhi