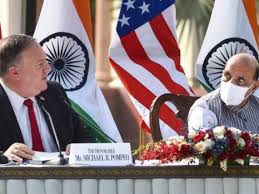 US Secretary of State Mike Pompeo had strong words for China today and said the US “stands with India to deal with any threat”. In the backdrop of India’s military stand-off with the Chinese troops at the Line of Actual Control in Ladakh, he also expressed his country’s support for India in its efforts to “defend its sovereignty”.

Mr Pompeo and Defence Secretary Mark T Esper had arrived on Monday for crucial talks aimed at boosting defence and security ties between the two countries.

The 175-day stand-off in Ladakh was discussed at their 40-minute meeting with National Security Advisor Ajit Doval at the South Block, officials said.

“We paid our respect to the soldiers who laid down their lives in the Galwan Valley recently,” Mr Pompeo said after a visit to Delhi’s National War Memorial, referring to the 20 soldiers who died in a clash with Chinese troops on June 15.

“The US will stand with India in its efforts to defend its sovereignty and its liberty… Our nations are committed to working together into expanding our partnerships across many fronts,” he added.

“The US-India relationship has been gaining strength over the last two decades, but more so in the last few years. There isn’t one, but two reasons for this partnership — one is India and one is the US,” said foreign minister S Jaishankar.