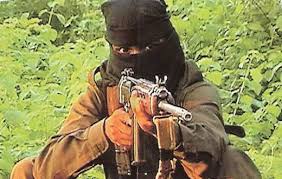 A Maoist leader was arrested in a joint operation conducted by the the Sashastra Seema Bal (SSB) and the local police in Bihar's Aurangabad district, officials said on Monday.
Acting on a tip-off, jawans of the SSB's 29th battalion, led by Commandant Rajesh Kumar Singh, along with local police personnel, apprehended Baadhu Mahto from Alpa village in the district on Sunday night, they said. Mahto was wanted in several cases, including extortion and murder, a police officer said, adding that the naxalite has confessed to his crimes.
He was produced before a local court, which sent him to jail, the officer added.