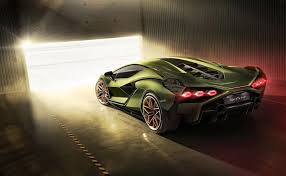 Lamborghini, the Indian luxury sports car maker is expected to officially reveal the Huracan Super Trofeo Omologato or STO this week. Just before its debut, the Italian marquee has teased the sports car on its social media channels. The new teaser posted on Twitter gives us an early glimpse at what we can expect from Lamborghini’s new model, revealing a few details of the car. The supercar will be unveiled on November 18. The carmaker will be broadcasting the unveiling event on its official website and other social media channels.

Going by the teaser image released by the carmaker, the upcoming Huracan STO will sport signature-style LED DRLs inside the headlamp housings. Moreover, a similar design is seen on a large wing sitting towards the rear. The first spy pictures of the car emerged on the internet earlier this year in March. The supercar was wrapped under heavy camouflage, hiding all the details.

IIT Delhi Converts 1948 Volkswagen Beetle In To An Electric Vehicle