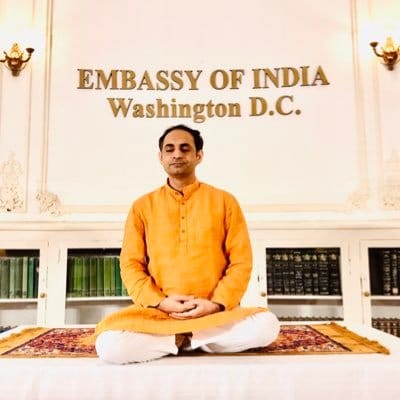 India’s first cultural diplomat to the US, Dr Moxraj, who spent last three years teaching Sanskrit, Hindi and spreading traditional Indian culture along with Yoga and meditation in many American states believes that the Vedic doctrine of “Vasudhaiv Kutumbkam” has found its own resonance in the post-COVID-19 world.

“India is the only country which believes in the doctrine of ”Vasudhaiva Kutumbakam” and this idea of India is not new but from the time of man’s origin, hence it was inspired by ”Yatra Vishva Bhavatyekanidam” in the Yajurveda,” said Dr Moxraj as he concluded his three-year tenure as the teacher of Indian Culture at the Indian embassy here.

“Even a civilized person does not want to spoil his family and kutumb in the same way, the culture of India has been working for the good of all. Therefore, India has been trying to maintain the natural balance through yoga, meditation, mental health and vegetarianism and non-violence,” said Dr Moxraj, who left for India on Friday.

Well versed in Vedic texts, Dr Moxraj was one of the 162 teachers sent by Indian Council for Cultural Relations three years ago to various diplomatic missions across the world to create awareness about traditional Indian culture, an initiative of Prime Minister Narendra Modi government.

“It is the government, which for the first time worked on a plan to appoint 162 Indian culture teachers in all continents,” he said.

Having worked under three Ambassadors – Navtej Sarna, Harshvardhan Shringla and Taranjit Singh Sandhu, Dr Moxraj, who was born in Rajasthan in 1979, in the last three years led the International Yoga Day celebrations in front of the US Capitol, White House and Washington Monument.

Through special classes started by the Indian Embassy, he taught Hindi and Sanskrit to Indian Americans, US citizens and members of the diplomatic community in Washington DC.

He was invited by George Washington University and Georgetown University to conduct special Hindi classes. Both the universities have given special praise to the Government of India and the Indian Embassy.

As millions of Americans were forced to stay home during the coronavirus lockdown, the Indian Embassy launched “Yog Apke Dwar” “Yoga at Home,” a free online yoga programme which was conducted by him.