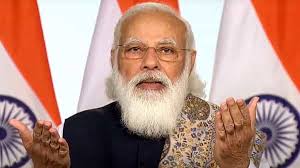 Prime Minister, Narendra Modi praised the selfless strong spirit of the country which has been on full display during the fight against Corona. Speaking after launching the pan-India rollout of COVID-19 vaccination drive via video conferencing today, Shri Modi said, in the year gone by, Indians learnt and endured a great deal as individuals, family and as a nation.

China’s Tencent Acquires Audiobook Platform Lazy Audio For $417 Million
The Prime Minister recalled with sensitivity and empathy the initial feeling of helpless confusion among the people of the country when people could not attend to their near ones when they got infected. This disease rendered the infected isolated and alone, when sick children were separated from their mothers and old parents were forced to battle the disease all alone in the hospitals. Even the departed relatives who lost the fight, could not be given proper send off. Such a memory saddens us even today, said a visibly emotional Prime Minister. Even in those dark days, some people were bringing hope and succour, recalled the Prime Minister. He dwelled at length on the contribution of doctors, nurses, para medical staff, ambulance drivers, ASHA workers, sanitation workers, police and other frontline workers who endangered their lives to save other.

READ  Kids and Catnapping– What you need to know