The Indian Railways on Friday announced that if your train is fully – from start station to end station – cancelled, your tickets will be cancelled and refunds will be processed automatically. In a tweet, the IRCTC, which handles online ticketing operations of the Indian Railways, said that in case of train cancellation, ‘PNR (passenger name record) will be automatically cancelled. Refunds will be processed in the same account through which payment was made’. 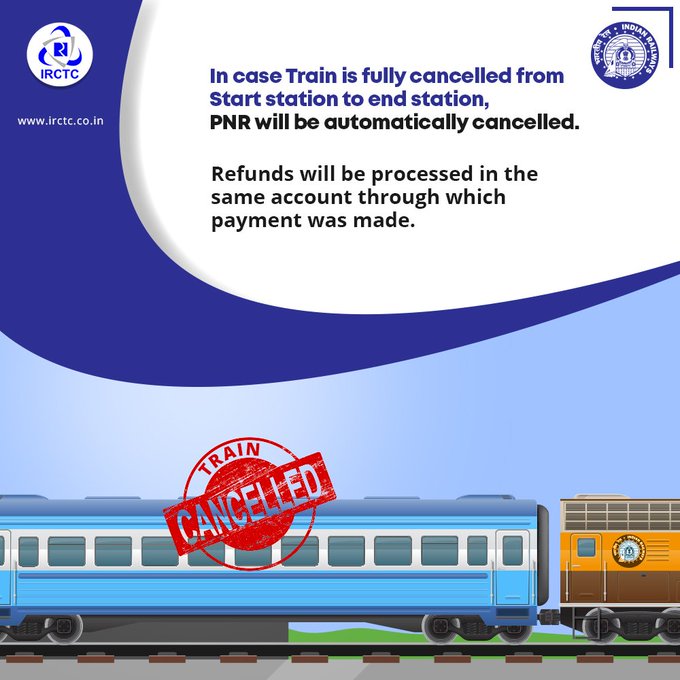 In the last couple of months, the government introduced several new rules to make passengers’ ticketing experience hassle-free. Last month, the Railways came up with some new rules to help the passengers seeking Tatkal tickets at the last minute in cases of emergency.

Due to high demand during summer, the Tatkal tickets get booked within a short span of time, especially on some of the busiest routes. Also, technical glitches on the IRCTC website make it difficult for passengers to book the tickets.

To deal with such problems, the Indian Railways introduced new rules:

In March, the Railways announced that it will allow passengers to transfer their confirmed ticket to another person in case they are unable to travel. It also put down guidelines on how to transfer a confirmed ticket. “Chief Reservation Supervisor of important stations are authorised by Railway Administration to permit the change of name of a passenger having a seat or berth reserved in his name,” the Railways said in a statement.

According to the guidelines, a person can transfer the confirmed ticket to another family member be it the father, mother, sibling, children or spouse. The person would need to make a written request 24 hours prior the scheduled departure. If a government servant wants to transfer a confirmed ticket then he or she can make a written request before 24 hours of departure.

In case a student of a recognised educational institute wants to transfer his or her ticket, then they will need to get the approval of the head of the institution. A written request by that authoritative figure will allow the transfer of the ticket to another student from the same institution.businesstoday