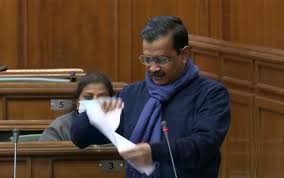 She said his government in Delhi was among the first to notify one of the central laws related to agriculture.

The Delhi Assembly on Thursday passed a resolution against the Centre’s three new agriculture laws with Mr Kejriwal tearing up their copies, saying he cannot betray farmers of the country.

In a statement here, Bathinda MP Harsimrat Kaur Badal said the Delhi CM was known as a “dramebaaz” but this time he indulged in “cheap theatrics” and “unparalleled hypocrisy” by tearing up the same laws in the Vidhan Sabha, one of which he had notified on November 23.

Asking Kejriwal to have “mercy” on farmers, Ms Badal said it is strange that the Delhi CM has suddenly discovered that farmers are sitting out in the open in cold wave conditions and over 20 of them have died.

“The Delhi chief minister is only shedding crocodile tears in a desperate bid to wipe away the blot he has put on his name by rushing to notify the farm laws on the directions of the central government. These dramas however won’t help. Farmers know that Mr Kejriwal and AAP have never supported their struggle and Mr Kejriwal has always danced to the tune of the central government,” she alleged.

The Bathinda MP and the SAD leader said this is not the first time that Mr Kejriwal has tried to “befool” farmers.

“Earlier also the Delhi chief minister first notified the farm laws secretly and when this fact came out in the open, he tried to win the sympathy of farmers by going in for a farcical inspection of a few toilets near the Singhu border,” she said.