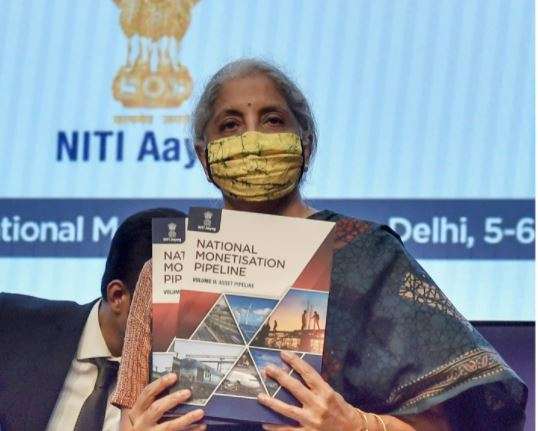 
The government on Monday announced a Rs 6 lakh crore National Monetisation Pipeline (NMP) that will look to unlock value in infrastructure assets. Projects have been identified across sectors, with roads, railways and power being the top segments. Finance Minister Nirmala Sitharaman said that the NMP estimates aggregate monetisation potential of Rs 6 lakh crores through core assets of central government over the four-year period from FY 2022 to FY 2025. She further said that the ownership of assets will remain with the government and there will be a mandatory hand-back.

Sitharaman said that Union Budget 2021-22 had identified monetisation of operating public infrastructure assets as a key means for sustainable infrastructure financing. Towards this, the budget provided for preparation of a ‘National Monetisation Pipeline’ of potential brownfield infrastructure assets. NITI Aayog in consultation with infra line ministries has prepared the report on NMP. She said that the aggregate asset pipeline under NMP over the four-year period is indicatively valued at Rs 6 lakh crore. The estimated value corresponds to 14 per cent of the proposed outlay for Centre under the National Infrastructure Pipeline (Rs 43 lakh crore), she added.

Shipping assets worth Rs 12,828 crore to be monetised

Shipping assets worth Rs 12,828 crore will be monetised over the next four years under the National Monetisation Pipeline (NMP). The monetisation does not involve selling of land and is about monetising brownfield assets. The shipping assets monetisation pipeline projects will be implemented by Ministry of Ports, Shipping and Waterways and potential models would be public private partnership (PPP).

As many as 25 Airports Authority of India (AAI) airports, including ones at Chennai, Bhopal, Varanasi and Vadodara, as well as 40 railway stations, 15 railway stadiums and an unidentified number of railway colonies have been identified for getting private investments. Under the plan, private companies can invest in projects for a fixed return using the InvIT route as well as operate and develop the assets for a certain period before transferring it back to the government agency. Some assets such as warehouses and stadiums can also be given on a long-term lease for operations.

More than half of the monetisation plan is from the roads and railways sector. The biggest chunk of Rs 1.6 lakh crore will come from monetising 26,700-km of existing operation national highways and new roads. NHAI will take the InvIT (Infrastructure Investment Trust) route for monetising some of these assets.

As many as 400 railway stations, 90 passenger trains, 741-km Konkan Railways and 15 railway stadiums and colonies are planned to be monetised for an estimated Rs 1.2 lakh crore.

The government has identified 160 coal mining assets worth an estimated at Rs 28,747 crore for monetisation over four years till FY25. These includes 17 projects on mine developer and operator (MDO) model, establishment of three washeries, one coal gasification plant, 35 identified first-mile connectivity projects for building coal silos/ mechanised loading, operationalisation of four discontinued/ abandoned projects and commercial auction of mines.

The total indicative value of assets considered for monetisation is estimated at Rs 28,747 crore over FY 2022-25, it said.

About Rs 22,625 crore of the assets are expected to be tendered out during FY 2022 itself. However, the actual capital expenditure (capex) will be phased out across the next three years.

The monetisation value in the pipeline has been accordingly considered based on actual capex phasing assumed over 4-5 years.

The Centre plans to monetise real estate assets worth an estimated Rs 15,000 crore, including several housing colonies in the national capital and eight ITDC hotels, under the National Monetisation Pipeline (NMP).

In the ‘urban real estate assets’ category under the NMP, the government has identified monetisation of seven colonies under redevelopment as well as development of housing/commercial units on 240 acre land in Ghitorni in the national capital.

Eight hotels of ITDC will also be monetised through different routes.

As per the document prepared by Niti Aayog, the urban real estate assets have monetisation potential of around Rs 15,000 crore during the financial years 2022-25.

In this category, the government has identified redevelopment of seven General Pool Residential Accommodation (GPRA) Colonies in Delhi.

The Centre has also identified development of residential/commercial units on 240 acre land in Ghitorni (Delhi). In this project, 8,000 units of GPRA and 3,000 units for migrant construction workers will be developed. The estimated investment is Rs 15,000 crore.