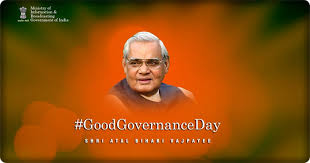 “Satta ka khel chalega” (the game of power will go on). Governments will come and go. Parties will be made and unmade. This country should survive, its democracy should survive”  —– Mr Vajpayee in Lok Sabha when his government faced a trust vote in May 1996

“Education, in the truest self of the term, is a process of self-discovery. It is the art of self-sculpture. It trains the individual not so much in specific skills or in specific branch of knowledge, but in the flowering of his or her latent intellectual, artistic and humanist capacities. The test of education is whether it imparts an urge for learning and learnability, not this or that particular set of information.” —– December 28, 2002 – inaugural speech of the Golden Jubilee Celebrations of the University Grants Commission

“The Pokhran-2 nuclear tests were conducted neither for self-glorification, nor for any display of machismo. But this has been our policy, and I think it is also the policy of the nation, that there should be minimum deterrence, which should also be credible. This is why we took the decision to conduct tests.”  —– In Parliament on the 1998 nuclear tests

“You can change friends but not neighbours.”  —– In Parliament in May 2003

“One cannot wish away the fact that before good neighbours can truly fraternise with each other, they must first mend their fences.”  —– June 23, 2003 – At Peking University

“We should strive hard to ensure that every R&D rupee brings greater benefits to the nation. Mutual suspicions and petty rivalries have continued to haunt us. As a result, the peace dividend has bypassed our region. History can remind us, guide us, teach us or warn us; it should not shackle us. We have to look forward now, with a collective approach in mind.”  —– Talking on South Asia at the 12th SAARC Summit in Islamabad in January 2004