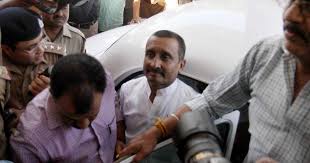 Justice Anu Malhotra directed the agency to submit its reply within two weeks to the plea and listed the matter for further hearing on January 12.

The High Court on November 6 issued notice to the CBI on Sengar’s appeal against his conviction and jail term and had also asked the agency to respond to his application seeking suspension of the sentence till pendency of the appeal.

During the hearing, CBI’s counsel sought more time to file the status report saying that the investigating officer of this case is also probing the UP’s Hathras rape case due to which he could not file the reply.

Advocate Kanhaiya Singhal, representing Sengar, submitted that he has a strong case for suspension of sentence and let the CBI file its reply then he would advance his arguments.

Sengar, who was also sentenced to the “remainder of his natural biological life” for raping the minor Unnao girl, was stripped of his membership on February 25 as the lawmaker of the Uttar Pradesh Assembly following his conviction in the rape case.

The father of the rape victim was arrested at the behest of Sengar in the Arms Act and had died in custody on April 9, 2018, owing to police brutalities in custody.

On March 4, Sengar, his brother and five others were convicted for the death of the victim”s father in judicial custody by the trial court which on March 13, sentenced them to 10 years imprisonment.

The trial court had also imposed a fine of ₹ 10 lakh on Sengar.

He has sought setting aside the verdict of the trial court by which he was convicted and sentenced in the case.

In the appeal, he said, “It is imperative for a fair trial that the investigating agency, prosecution and witnesses present the true facts before the court and that the court, in turn, must ensure that a free and fair trial…”