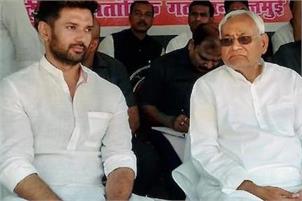 The Lok Janshakti Party on Monday authorised its president Chirag Paswan to take a call on whether the party will fight against Bihar Chief Minister Nitish Kumar-headed JD(U) in the upcoming assembly polls and decided to prepare a list of candidates for 143 constituencies.
Paswan headed a meeting of the party's parliamentary board from Bihar in which the state government was criticised for its overreliance on bureaucracy, with some LJP leaders claiming that Kumar is no longer a popular face, sources said. As the LJP meeting went on, the Janata Dal (United) said any party which is a part of the National Democratic Alliance (NDA) in the state will have to accept Kumar's leadership.
JD(U) spokesperson K C Tyagi said top BJP leaders, including Home Minister Amit Shah and party president J P Nadda, have announced that the NDA will fight the upcoming Bihar assembly polls under Kumar's leadership.
The JD(U), he said, has always had an alliance with the BJP in Bihar and at times in other states, but not with any other NDA member.
“Whether it was in 2005, 2010 or 2015 assembly polls, we have never had any tie-up with the LJP,” Tyagi said, hinting that his party won't enter into an alliance with the LJP.

LJP sources said that many party leaders claimed in the meeting that people of the state are not enthusiastic about Kumar's leadership and are also “angry” that he has pushed for assembly elections at the time of the coronavirus pandemic.

“When the JD(U) says that its tie-up is not with the LJP, then we should put up our candidates against it,” a source said.

Chirag Paswan asked his party leaders to refrain from attacking former chief minister Jitan Ram Manjhi, a Dalit leader like him, who has been attacking the LJP since joining hands with the JD(U).

The Election Commission is likely to soon announce the schedule for the elections to the 243-member state assembly. They are slated to be held in October-November.

The LJP had contested on 42 seats in the 2015 elections in alliance with the BJP and other NDA members. The JD(U) was then a part of the opposition alliance in Bihar.

Amit Shah asserts: Nitish to be next CM of Bihar