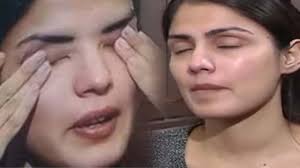 The CBI's Special Investigation Team will question Rhea Chakraborty for the third day in a row in connection with the death of Bollywood actor Sushant Singh Rajput.
Earlier on Saturday, Rhea Chakraborty was questioned by a CBI team. It may be recalled that Rhea was first questioned by the CBI for around 10 hours on Friday (August 28) at DRDO guesthouse in Mumbai. Rhea, who arrived at the DRDO guesthouse around 1.30 p.m., was quizzed by CBI's Superintendent of Police Nupur Prasad, and left around 8.20 p.m. with a Mumbai Police escort. On Friday, she was questioned by CBI for over 10 hours. According to CBI sources, Rhea was questioned about the claim that she used to splurge on shopping using Sushant's credit card according to the statement of Sushant's flatmate Siddharth Pithani. She was also questioned about the details of Sushant's treatment, why he used to stay at Waterstone resort and what he discussed about his dream project. Bollywood actor Sushant Singh Rajput was found dead at his Bandra residence on June 14, 2020.