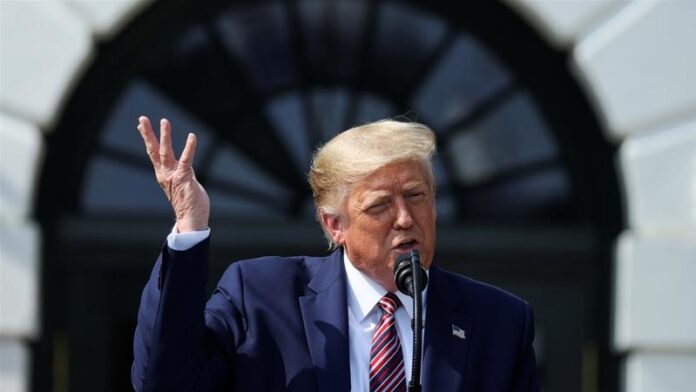 U.S. President Donald Trump on Wednesday declared that catching the coronavirus was a “blessing from God” that exposed him to experimental treatments he vowed would become free for all Americans, in his first video message since leaving hospital.

Trump, eager to revitalize his ailing re-election campaign, repeatedly stressed how well he felt so far in his recovery from COVID-19, the disease caused by the coronavirus. It was unclear if he was still testing positive for the virus.

“I think this was a blessing from God that I caught it. This was a blessing in disguise,” Trump said, adding that his use of the medication from Regeneron Pharmaceuticals Inc had allowed him to experience first-hand how effective it could be.

Trump, who has been widely criticized for a slow response to the pandemic that has killed more than 210,000 Americans and putting his own staff at risk by discouraging the use of masks in the White House and on the campaign trail, also cited similar medication from Eli Lilly and Co.

“I want to get for you what I got. And I’m going to make it free,” Trump said.

His video message followed White House assurances that the 74-year-old president was back at the Oval Office on Wednesday, getting briefed about economic stimulus talks and Hurricane Delta, just two days after his discharge from Walter Reed military hospital.

A White House official said Trump entered the office from the Rose Garden to avoid walking through the White House hallways and possibly exposing others to the coronavirus.

Trump had been in his residence in the White House since his dramatic made-for-video return from Walter Reed in a helicopter on Monday night.

Trump, who faces Democrat Joe Biden in the November election, has had no COVID-19 symptoms for the past 24 hours, his doctor Sean Conley said in a statement.

“He’s now been fever-free for more than four days, symptom-free for over 24 hours, and has not needed, nor received, any supplemental oxygen since initial hospitalization,” Conley said