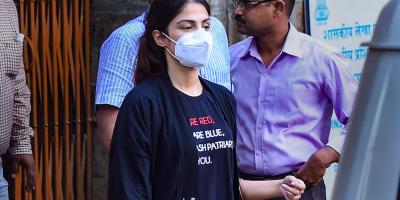 Actor Rhea Chakraborty, arrested over drugs-related charges in the Sushant Singh Rajput case, has said she was coerced into making self-incriminatory confessions that she has retracted in her bail request to be heard by a court in Mumbai today.

The court will also decide on her brother Showik, who was also arrested for similar charges. Rhea Chakraborty has said in her bail petition that she has “not committed any crime whatsoever and has been falsely implicated in the case”. “During her custody, the applicant was coerced into making self-incriminatory confessions. By her application dated September 8, the applicant has formally retracted all such incriminatory confessions,” says the 28-year-old in her petition. The petition argues that her arrest was “unwarranted and without any justification,” that her liberty was “arbitrarily curtailed” and that no female officer was present during her interrogation. Rhea Chakraborty says she “had no access to any legal advice during her questioning when she was interrogated for a minimum of eight hours at a stretch by multiple male officers”.

She also said the offence involved only a small quantity of drugs and therefore, called for only a year's jail and was a bailable charge. Rhea Chakraborty was yesterday moved to Byculla Jail, the only prison for women in Mumbai. Her earlier bail request was rejected by a magistrate who sent her to jail till September 22. The 28-year-old actor was arrested on Monday on charges of buying drugs for her boyfriend Sushant Singh Rajput, a young movie star whose death on June 14 is being investigated by various agencies including the CBI. She faces charges that could lead to up to 10 years in jail. A drugs twist emerged in the case when the Enforcement Directorate, in its investigations into alleged financial crimes, found WhatsApp chats on Rhea Chakraborty's phone revolving around the buying or arranging of drugs for Sushant Singh Rajput. Rhea Chakraborty and her brother Showik Chakraborty are accused of arranging drugs with help from Sushant Singh Rajput's employees Samuel Miranda and Dipesh Sawant, who were allegedly in touch with drug dealers.

READ  Rhea Chakraborty questioned by CBI for the first time

Rhea was “an active member of the drug syndicate connected with drug supplies” and knew of “every delivery and payment,” the Narcotics Control Bureau said in its court documents. “It is also clear from the statement that Rhea Chakraborty used to procure drugs for Sushant Singh Rajput for consumption purpose,” the anti-drugs agency said.

Several prominent members of the film fraternity have come out in Rhea Chakraborty's support on social media in a counterweight to a large section that has targeted her over Sushant Singh Rajput's death, including his family.