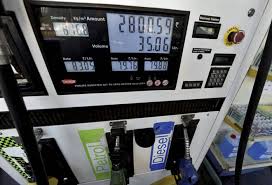 Petrol and diesel prices remained unchanged for fifth day in a row on Saturday (December 12) after being hiked for seven consecutive days. In the national capital, the price of petrol remained constant at ₹ 83.71 per litre with effect from 6 am on Saturday, and that of diesel was unchanged at ₹ 73.87 per litre, according to Indian Oil Corporation, the country’s largest fuel retailer. In Mumbai, petrol and diesel rates were at ₹ 90.34 per litre and ₹ 80.51 per litre respectively. In Delhi, petrol prices were hiked by ₹ 2.65 per litre and diesel prices have risen by ₹ 3.40 per litre in the last 20 days alone. The fuel prices in Mumbai are the highest among metros.

The oil companies align the domestic fuel prices with global benchmarks by considering the changes in the foreign exchange levels. Domestic petrol and diesel prices vary across states due to value-added tax (VAT).

The state-owned oil marketing firms Indian Oil Corporation, Bharat Petroleum, and Hindustan Petroleum Corporation, which currently own the majority of fuel stations across the country, review the fuel prices on a daily basis, and implement any changes with effect from 6 am.

Volvo might soon launch the new XC40 in India