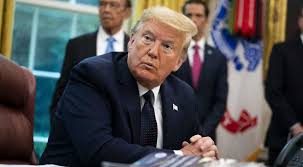 The border stand-off between India and China has been “very nasty” and “they (China) are certainly going at it”, United States President Donald Trump told reporters at a White House press briefing on Friday. Mr Trump said he had raised this issue with both India and China, and the US was ready to help.

“While we're at it, we're talking about China and India, (they) are going at it pretty good on the border, as you know. It has been very nasty, ” Mr Trump said, adding, “And we stand ready to help, with respect to China and India”.

“If we can do anything, we would love to get involved and help. And we are talking to both countries about that,” he also said.

The US President's comments come amid renewed tension between India and China over what the government called new attempts by Beijing to change the status quo in certain areas in eastern Ladakh. Defence Minister Rajnath Singh met his Chinese counterpart in Moscow late Friday on the sidelines of a three-day summit, in the first high-level contact of its kind since the border stand-off erupted in May.

In a pointed message before the meeting, Mr Singh said peace and security in the region demanded a climate of trust, non-aggression, peaceful resolution of differences and respect for international rules. The Indian Army said this week that it had blocked Chinese troops in the most serious clash since 20 Indian soldiers were killed in June; the violence in Ladakh's Galwan was the worst between the two countries in decades.

These attempts were made even as the two nations are engaged in diplomatic and military talks – which have, so far, done little to resolve the border row.