Tata Steel Ltd and JSW Steel Ltd have submitted binding bids for Bhushan Power and Steel Ltd, the debt-laden company that has been referred to a bankruptcy court by its lenders, two people with direct knowledge of the development said.

The liquidation value and the fair value have been fixed at Rs9,000 crore and Rs24,000 crore, respectively, the people said, requesting anonymity. JSW Steel has bid Rs13,000 crore for the asset, one of the two people said. The value of Tata Steel’s bids couldn’t be ascertained.

Bhushan Power, which owes at least Rs37,000 crore to a consortium of lenders led by state-run Punjab National Bank, is among the 12 large companies identified by the Reserve Bank of India for early insolvency resolution. 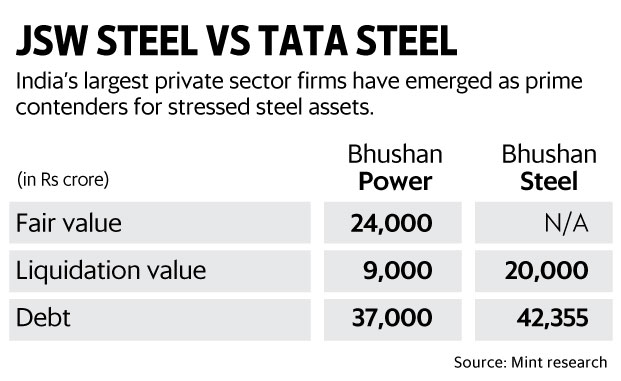 Mahender Kumar Khandelwal, leader and partner of business restructuring at BDO India Llp, was named the interim resolution professional for the company. It is the ninth among the 12 companies to receive binding bids. The others are Monnet Ispat & Energy Ltd, Electrosteel Steels Ltd, Jyoti Structures Ltd, Amtek Auto Ltd, Alok Industries Ltd, Lanco Infratech Ltd, Jaypee Infratech Ltd and Bhushan Steel Ltd. None of these resolution plans have been approved.

“The bids, accompanied by the respective resolution plans, will be referred to Competition Commission of India for approval before a buyer is chosen,” said one of the two people cited earlier.

Tata Steel and JSW Steel are trying to strengthen their hold on the market by acquiring steel assets undergoing insolvency resolution and keep out potential rivals. Tata Steel has a domestic steel capacity of 13 million tonnes per annum (mtpa) and JSW Steel 18mtpa.

“Tata Steel and JSW Steel are among the very few who are well placed to acquire additional capacities.” said Anand Bhageria, a partner at Singhi Advisors, a Mumbai-based investment banking firm.

This is the second time in less than a day that Tata Steel and JSW Steel have faced off over the same asset. the two had emerged as leading bidders for Bhushan Steel.

The combined steel capacity of the two Bhushan companies is more than 10mtpa.

According to the people cited earlier, while Bhushan Power had received expressions of interest from as many as 13 potential suitors including Vedanta Ltd and ArcelorMittal, only Tata Steel and JSW Steel had submitted binding bids by the 2pm deadline on Thursday.

Excess2sell Raises $1 Million In Latest Round Of Funding