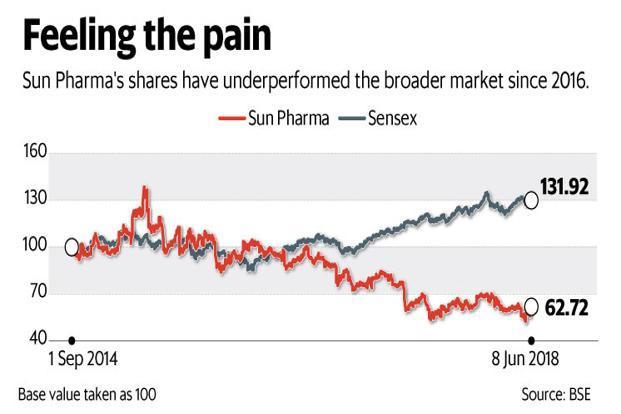 Is this the beginning of something good for Sun Pharmaceutical Industries Ltd?

More importantly, will investors regain their long lost faith in the company, whose shares have halved from their high levels of April 2015?

Consider the 8% jump in its share price on Friday. News reports said the US Food and Drug Administration had delivered a voluntary action indicated (VAI) verdict after an inspection of its Halol facility.

This was apparently interpreted by investors as a sign that a re-inspection was not required.

In turn, that implied a shorter resolution timeline after which pending generic drug approvals could get cleared.

The significance of this resolution, if it does actually happen, is not in question.

The plant’s non-compliance has held up approvals for nearly four years now and is partly responsible for Sun Pharma’s US business underperformance. But this development should not have been news to Sun Pharma’s shareholders.

In a conference call on 25 May, after its March quarter results, Dilip Shanghvi, managing director’s responses to questions on Halol also indicated as much.

He said that they did not expect a re-inspection and that the last date for a post-remediation response to FDA was in the second quarter of fiscal year 2019.

The guidance for FY19 too included a quarter or two of revenues from launches from Halol, which assumed it would get a green light.

Still, its shares went up 8% on news that merely confirms what the management said very recently. Does that reflect lack of confidence in the management’s assertion?

That is possible. It’s been nearly four years since Halol came under the FDA scanner, in which it has tripped on multiple inspections and was also issued a warning letter. You can’t fault investors for wanting to see proof that this time could actually be different.

The management’s response to the stock exchanges, after Friday’s news, says they will be able to provide an update after they get an establishment inspection report (EIR).

The EIR is a closure report that will hopefully see Halol turn compliant, the warning letter will get lifted, and the cycle of approvals will resume.

That is important as Halol’s resolution could add as much as $100 million in revenues annually, according to a Motilal Oswal Research note.

While that can add to revenue and profit, the cash flows so generated will be useful for its research programmes.

The problems in the external environment will remain, such as pricing pressure and competition in the US market or the threat of domestic policy proposals to control drug prices.

But Halol was a problem of its own making. Getting rid of it will allow the management to focus on the market. Thankfully, there are no recent repeats of Halol in other locations. In the same conference call, Shanghvi had said the past year saw 18 site audits by the US FDA, which resulted in either zero or very limited observations. If they can maintain that record, say for the next five years, their credibility on this front should recover.livemint

Strides Pharma Gets Nod For Prednisone Tablets; Stock Sheds Over 1%

WHO Advises Against Remdesivir For Coronavirus Treatment