Fans of Netflix’s supernatural thriller Stranger Things can now step into the shoes of their favourite characters in the official Stranger Things game. It comes a few days ahead of the Season 2, which is expected to air on 27 October on Netflix, to create some buzz. The game is developed and published by Bonus XP and is available as a free download on Google Play Store and App Store.

Like the series, the game also tries to capture the essence of the 1980s, back when 16bit PC games were in vogue. A lot of retro games have made a comeback recently with the trademark pixellated visuals. Sega released an entire collection of classic games with retro looks, under Sega Forever, for mobile platforms. If you have played those games, you may enjoy having a go at it again.

The eerie musical score of the Stranger Things series forms the background score for the game as well. The game offers a top-down view. Players can’t change the camera angle or toggle through the screen. The game is divided into a series of chapters, named after the episodes in the series. Players get to control the movements of one character in every chapter. So in the first chapter, you get to control Police chief Jim Hopper and help him look for clues to find Will Byers. Tapping on specific items or spots controls all actions in the game. One can look into a cupboard, open a door, pick an item or attack a hostile character using them. 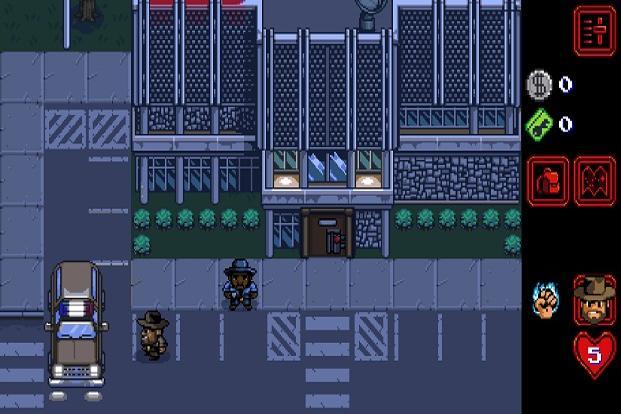 The game has elements of multiple gaming genres. It involves solving puzzles, finding clues and action.

The controls work fine, but a joystick-like button to control player movement would have been more fun. Conversation between characters shows on the screen with their faces changing as the conversation progresses.

The game has elements of multiple gaming genres. It involves solving puzzles, finding clues and action.

There are two modes—the normal mode and the more challenging Classic mode. The game works offline and takes up 93MB after installation. But due to its simple graphics, it will run smoothly on the most basic of Android devices.