The government has decided to keep the interest rate on small savings schemes like the Public Provident Fund (PPF), National Savings Certificate (NSC), Kisan Vikas Patra (KVP) and Senior Citizen Savings Scheme (SCSS) unchanged for the July-September quarter of the current financial year. This is the second consecutive quarter in which these rates have been kept unchanged even as the Reserve Bank of India increased the repo rate by 25 bps in its June monetary policy review.

The last time small savings rates were changed was in the January-March quarter of 2017-18—interest on PPF, KVP and Sukanya Samriddhi was reduced by 20 basis points (bps) each. One bps is one-hundredth of a percentage point.

Over the last couple of years, interest rates of many small savings schemes have declined by about 1 percentage point. For instance, the rate on SCSS has come down from 9.3% in FY 2015-16 to 8.3% now. 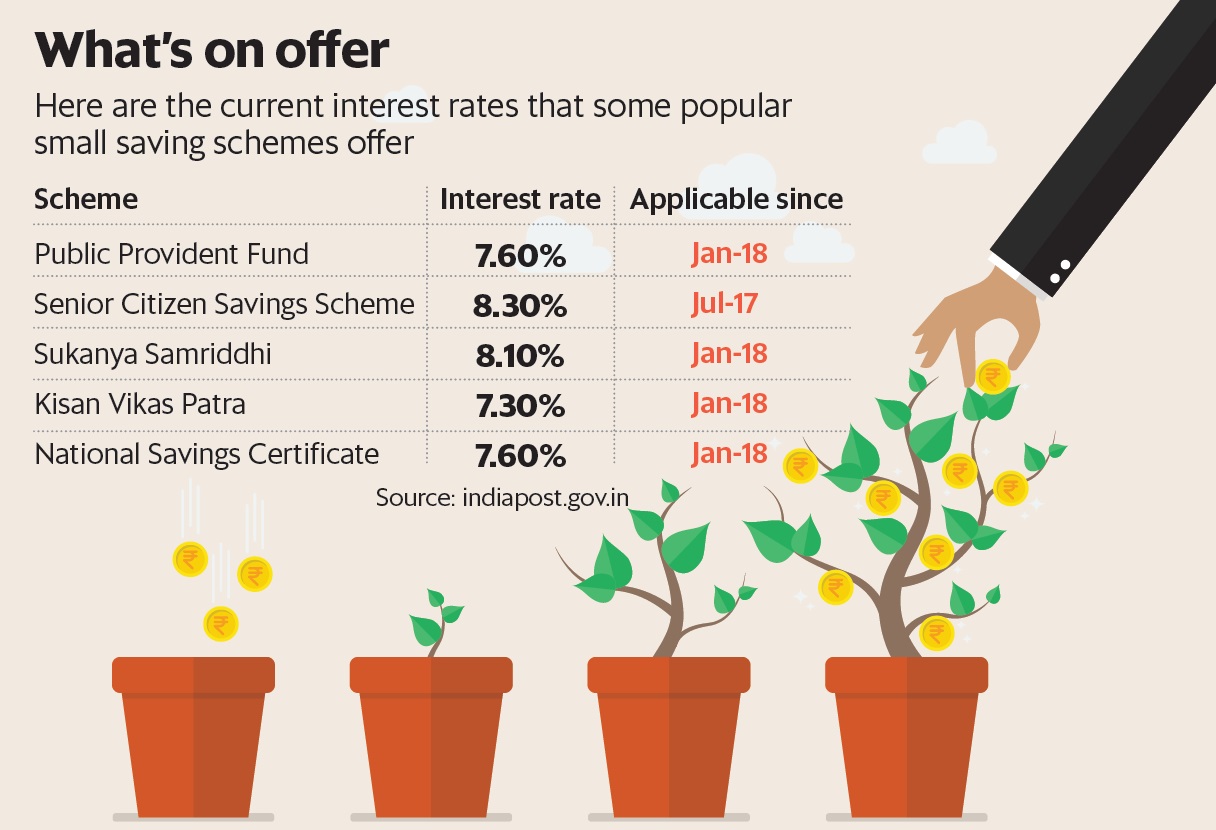 How are rates fixed?

Returns on small saving instruments were linked to the market in 2011, and were then adjusted annually. This was done so that the interest rate on these could be pegged to the average government securities (G-secs) yield with similar maturity in the preceding year. However, since January-March 2015-16, the government started revising these rates quarterly, instead of doing so annually. This happened after a substantial cut in policy rates by the central bank. Since then, rates have declined gradually.

Even before the RBI raised policy rates in June this year, the expectation of a reversal in trend in small savings rates had kicked in. This was because G-sec yields have risen sharply in recent months, particularly after Union Budget 2018 was presented. The yields went up from 6.414% on 6 February 2016 to 7.562% on 2 February 2017. Currently, the G-sec yield is at 7.910%.

This has happened due to concerns on fiscal deficit and an expectation of higher minimum support price for crops which could increase prices. Read more about this here

What should you do?

With several factors like increasing oil prices internationally and the depreciation of the rupee, it is expected that rates will go up. If interest rates go up further, there could be an upward change in small savings rates in the subsequent quarters.

While the rates of small saving instruments may not go down further, before you decide on a financial product to invest in, you should compare it with other avenues. Look at the returns, besides other parameters like taxation and liquidity. Some of the small saving schemes fit in the portfolio of many individuals because the returns are tax free.

A Giant 5.7 Billion USD Stroke of Confidence in the Indian Digital Story

Finaureus Technologies ties up with US based Validea to launched AlphaNiti