Thailand-based retail giant Siam Makro entered the cash-and-carry segment in the country on Thursday as Lots Wholesale Solutions. With Rs 10 billion in its kitty, it will take on Walmart and Metro Cash and Carry over the next five years.
Lots plans to open 15 wholesale distribution stores in the next three years, and follow the mixed model of leasing as well as buying commercial spaces for its stores and cold chain network.
It will also lease farm land for growing fresh produce.
Makro’s parent firm, Charoen Pokphand (CP), plans, for now, to run these business-to-business (B2B) cash-and-carry stores in the country.
The company has come in through the 100 per cent foreign direct investment (FDI) route.
CP also operates a chain of convenience store businesses in Thailand, under the 7-Eleven trademark. The company was granted a licence to use the trademark by 7-Eleven, USA.
7-Eleven is an American-Japanese international chain of convenience stores, headquartered in Irving, Texas. It operates 56,600 franchises and licence shops in 18 countries.
The headquarters of the Indian branch will be in Gurugram, the National Capital Region. It plans to recruit 5,000 direct and indirect employees over the next three years. According to the company, it will begin its expansion from north India and set up stores in Delhi and NCR, Haryana, Rajasthan, and Punjab in the first phase.
While the company is planning to concentrate on cash-and-carry for now, it is not averse to opening B2C retail stores in India, if the government changes the multi-brand retail rules and allows 100 per cent FDI in the sector.
“At a group level there are other subsidiaries which are in the B2C retail space. 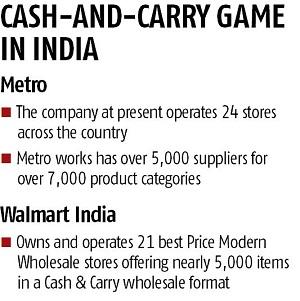 As of now, we want to make the Makro journey in India a success so we are concentrating on that, but if the Indian government does consider making changes in the multi-brand retail rules, then at the group level we will have some degree of interest,” said Tanit Chearavanont, managing director, CP Wholesale-India.
The company is also open to the idea of 100 per cent FDI in food retail, if at least 25 per cent of non-food items are allowed to be sold in the stores. The country could be looking at an initial investment of more than Rs 638 billion, if the government gives a final nod to desired changes in FDI in retailing.
Companies such as Walmart, Tesco, and Auchan are all interested in entering the B2C retail space in India via this route. The first two stores of Lots Wholesale Solutions will be opened in Delhi-NCR in 2018. Siam Makro to enter cash-and-carry segment with an investment of Rs 10 bn The company, over the next few months, plans to set up front-end stores, a cold chain-supporting network as well as a logistics set-up for delivery of products to its business customers at their steps. It also plans to lease agriculture land to source fresh produce for its stores.
“Fresh produce is a major category for us. While we will source via APMC and directly from farmers, we might also lease farms. We will also set up our cold chains,” said Sameer Singh, director, development and expansion, in the company.
Besides Thailand, the company has the cash-and-carry business in Cambodia. Headquartered in Bangkok, the CP group has interests in agri-business, telecom, plastics, automotive, pharmaceutical, property, and financial investments.business-standard

Suspension of Trading in Debentures of PRISM JOHNSON LIMITED.