NEW DELHI: The rural development ministryplans to seek more funds from the government for its flagship jobs schemesince a spending binge to ameliorate rural stress is likely to eat up three-fourths of its budget by June.

The ministry is expected to ask for at least Rs 12,000 crore more, which will increase the allocation for the Mahatma Gandhi National Rural Employment Guarantee Scheme to an unprecedented Rs 50,000 crore for the current fiscal. 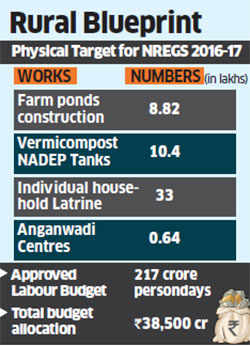 The government has released over Rs 12,000 crore to states for pending payments this month out of its total allocation of Rs 38,500 crore. Additionally, the ministry has given Rs 7,000 crore for drought proofing works to be taken up till June on a mission mode. In the next two months, it is likely to give states more funds for constructing farm ponds and water conservation units, among other works.

With the country reeling under drought in many regions, the Supreme Court had pulled up the government for not providing adequate funds underMGNREGA to help the states in this crisis. “All these activities will not leave us with much money to carry on work after July, whether we get a good or a bad monsoon,” a senior government official said.

The demand for work under MGNREGA will pick up further if the drought situation persists, which will necessitate more funds, the official said. Prime Minister Narendra Modi had recently said that he would use the funds under this scheme to drive a campaign for water conservation from April to June. “I can use all available resources towards water conservation so that we can survive even if we do not get adequate rains,” the PM had said.

All states have been asked to take up such work on priority under the employment guarantee scheme and to ensure a more targeted response. “We are trying to ensure that adequate resources are available to the states from the Centre,” the official said.

WHEAT PROCUREMENT PROVES A BOON FOR SMALL, MEDIUM AND MARGINAL FARMERS IN MP