Mumbai: In a scathing indictment, the Allahabad Debt Recovery Tribunal (DRT) had last year accused bankers to the Rotomac Global group of gross misconduct and negligence in granting credit and failing to detect irregularities in multiple accounts.

The 12 July order of the tribunal even recommended a forensic audit, starting from the time of giving loans to Rotomac group firms and later continuing to extend such loans by reducing collateral margins and negligence in demanding adequate collateral. This order, called a reference of enquiry, was sent to the banking division, Reserve Bank of India, and chairmen of the lending consortium. Mint has seen a copy of the order. 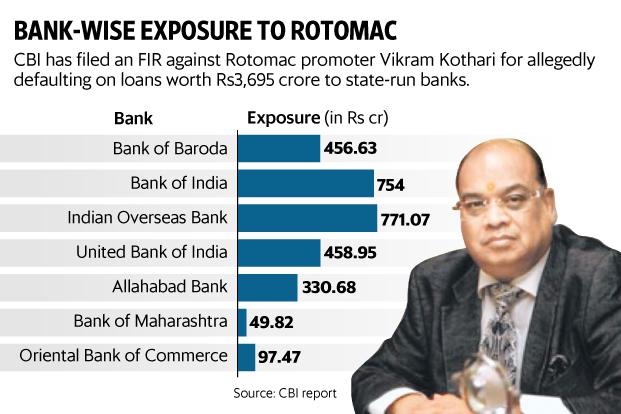 On Sunday, the Central Bureau of Investigation (CBI) filed a first information report (FIR) against Rotomac Pens promoter Vikram Kothari for defaulting on loans worth Rs3,695 crore to state-run banks. The company’s account was declared non-performing in October 2015 after it defaulted on loan repayments. Later, banks started filing recovery suits worth a collective Rs4,290 crore against the firm.

Hearing an application for recovery filed by the Indian Overseas Bank (IOB), the tribunal expressed dissatisfaction with the bankers failing to detect irregularities. It noted that there appeared to be a case of money laundering, diversion of funds and the possibility of fictitious trading transactions. It also expressed unhappiness with banks’ responses to its notices.

It said letters of credits issued seem to be fictitious transactions, Rotomac group firms had failed to take any legal action against their foreign clients and bankers did not even ask for such information from the group entities.

The order accused Bank of India and IOB executives of concealing facts and giving evasive replies. It said that Bank of India became the leader of the lending consortium at a time when its letters of credit were devolving and it was finding it difficult to recover its dues. The tribunal added that it found it strange that “members of the consortium, for the reasons best known to them, failed to convey their individual default to the other bankers”.

The tribunal further remarked that IOB had extended additional credit facility on 12 April 2014 for Rs1,700 crore, with Rs1,400 crore for forward sale and purchase contract, without any collateral. It added that the collateral margin for all the letters of credit issued by banks to Rotomac after 16 November 2013 was reduced by 75%.

“Their collective callousness and mismanagement has caused great loss to public exchequer and public money,” the order noted. This was a case of lapses “in pre-sanction loan, appraisal and lack of post-disbursement supervision and is a live example of slackness and further misuse of discretionary powers with favouritism by the key persons/officials of banking management to the adversity of Financial Interest of Banks and the Nation”.

An IOB spokesperson did not respond to calls and emails.

The order also said that banks should initiate departmental inquiries against employees for lapses, adding that this should be reported to RBI and other agencies.

A 20 February Mint report said Bank of Baroda (BoB) had initiated an internal investigation to check for fraud and later reported it to RBI in December 2017. It is not clear if other banks had ordered audits or initiated action against employees.

A BoB spokesperson said that a forensic auditor for Rotomac was named on 27 November 2015. “Bank of Baroda followed all necessary steps including appropriate and timely disclosure to the regulator,” the spokesperson said.

Dinabandhu Mohapatra, managing director of Bank of India, said that the tribunal had meant an audit of the Rotomac group of companies rather than the banks.

“We had conducted the forensic audit of Rotomac last year. The report is not closed,” said Mahapatra. In any case, he said, “the National Company Law Tribunal will take up the final resolution of the case”, referring to the insolvency application filed by BoB.

Bank of India has “not given any additional funding to Rotomac after it was declared a non-performing loan in FY16. BOI had become the leader of a consortium to facilitate documentation among multiple banks”, Mohapatra said.

ICICI- Ready for the tough times, recent correction makes it an attractive Buy