Fitbit says the Ionic (Rs22,990) is its first true smartwatch—its predecessor, the Blaze, is more of a fitness watch.

The design cannot be categorized as pretty. The square dial may not look at home on thinner wrists, and it definitely feels larger around the wrist than the 42mm Apple Watch. That said, the Ionic does come in multiple colour options and a wide variety of straps with an easy swap mechanism. It is water resistant up to a depth of 50m.

Fitbit is playing up the Ionic’s smartwatch credentials because of the new operating system, the FitbitOS. It has a slick user interface, some bright watchfaces, improved activity detection and support for third-party apps. The apps you can currently download include the Philips Hue app that controls smart lights at home, and Flipboard for the latest news, but, beyond that, the cupboard is pretty bare. There is hope that in due course, more developers will make their apps work on the FitbitOS.

The 1.42-inch (348×250 resolution) display is sharp, and bright enough to get the job done even in bright sunlight. However, touch response isn’t always the most accurate. The auto mode increases and decreases the screen’s brightness quite smoothly. Visibility in sunlight is quite okay too. 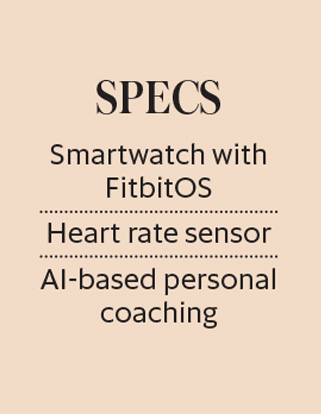 The Ionic’s fitness-tracking capabilities are its real highlight. It retains the close-to-perfect algorithms from the Blaze for tracking activity all day, and the heart rate sensor readings are within a 3-4bpm range of the Apple Watch, which is widely regarded as having the best heart rate sensor among all wearables. The Fitbit app (free for Android and iOS) is a few notches above any of its rival wearables, and logs data for activity, heart rate, sleep tracking, diet, etc. Fitbit has added the new Coach feature, which relies on Artificial Intelligence to guide you through workouts and sets targets based on your individual routine and preferences.

Perhaps the strongest point is the battery life, which can even last a week on a single charge, with the heart rate sensor active.

Despite significant improvements over the Blaze fitness watch, however, Fitbit’s Ionic smartwatch doesn’t yet come across as a complete package. The digital payments Pay app is not active yet, and the SPO2 blood oxygen monitor is currently disabled as well. There is a feeling that it will take a few more firmware updates before the Ionic really gets into its stride. At the moment, this is less an Apple Watch rival, and more an alternative to the Samsung Gear Sport.livemint