NEW DELHI: Reliance Jio Infocomm is set to bid aggressively for spectrum in the forthcoming auction, upending expectations of rivals and raising the prospect of having to pay more than they had expected. Jio has filed the highest earnest money deposit (EMD) — around Rs 6,500 crore, almost the same as the combined deposits made by the top three telcos, an indication of the Mukesh Ambani-owned newcomer’s aggressive intent in the spectrum sale slated to start October 1.

“Going by (rough) calculations of EMDs, the government could sell airwaves worth Rs 1.5 lakh crore just at the reserve price, which could translate into upfront payment of at least Rs 55,000 crore,” a senior official told ET. 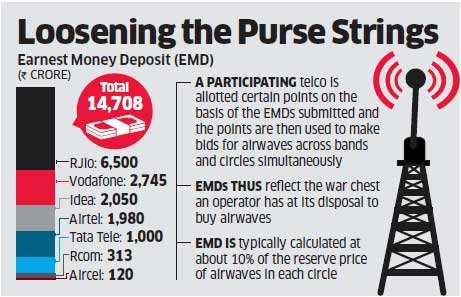 Analysts differed, saying the government is likely to raise around Rs 80,000 crore from its largest sale of airwaves.The finance ministry has budgeted revenue of Rs 98,995 crore from telecom, which includes less than Rs 55,000 crore from the spectrum auction this fiscal year. The rest is expected to come from various levies, services and dues from the auctions last year.

Jio’s auction pitch took the industry by surprise as it had been assumed the company would not bid aggressively and only look to fill coverage gaps. This was based on Jio having acquired sufficient capacity in recent auctions and a sharing and trading pact with RCom. “We are surprised to see Jio’s deposit. It’s way above our estimates but shows its intent,” said a top executive.

Telecom veteran BK Syngal of Dua Consulting said Jio could well buy some spectrum in the 700 Mhz band given the deposit. An analyst at a foreign brokerage said even no. 1telco Bharti Airtel could pick up 700 Mhz spectrum in certain circles — Uttar Pradesh East and West and Bihar —where prices are relatively low. Participants are allotted points on the basis of the EMD.

The deposit reflects the war chest an operator has to buy airwaves. EMD is typically pegged at about 10% of the reserve price of airwaves in each circle. Jio’s EMD shows that at the current base price, the company could theoretically buy spectrum worth Rs 65,000 crore. 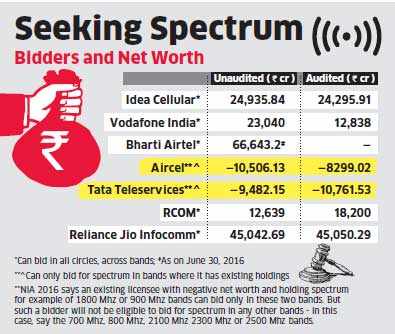 With Airtel comfortably placed on data spectrum holdings, Vodafone India and Idea Cellular could be vulnerable to escalating auction rounds since the two have no choice but to buy 4G airwaves. Without these frequencies, they would be at a disadvantage as the battle shifts to mobile data. The 4G airwave holdings of Vodafone and Idea in terms of circles are less than half those of Airtel and Jio. The government is auctioning 2,354.55 MHz of spectrum across seven bands, including 700 MHz band, which is being offered for the first time.

At the reserve price, the airwaves are valued at over Rs 5.6 lakh crore, of which Rs 4 lakh crore is expected from the 700 MHz bandwidth, considered the best for 4G services but also the most expensive. “Vodafone and Idea might actually bid for airwaves in the 2300 Mhz and the 2500 Mhz band rather than the 1800 Mhz band for 4G,” an executive said.

Airwaves in the higher bandwidth are cheaper than those in the 1800 Mhz band.

“Had 1800 Mhz band been priced say 30% cheaper than what is it, it would have made more sense for the two telcos to buy it then,” the person added. Another executive said Airtel was also expected to buy more airwaves but primarily to plug gaps in its 3G and 4G holdings.

“The company holds 3G airwaves in 2100 Mhz band only in 13 circles and could beef that up. Similarly, it could buy additional bandwidth in both the 2300/2500 Mhz as well as the 1800 Mhz bands to improve its 4G capacity,” another person said.

Tata is likely to focus on buying back spectrum in the 800 Mhz band in Mumbai, Maharashtra and Andhra Pradesh that expires next year. “Based on the EMDs, we think the auctions will be interesting and that final bidding value could be upwards of Rs 20,000 crore each for the four operators with the highest EMDs,” said Prashant Singhal, leader of the telecom practice at EY.

Final auction proceeds are typically less than 5.5 times the EMD deposits. “Hence, with EMD deposits of Rs 15,028 crore, we would estimate the auctions to yield between Rs 75,000 crore and Rs 80,000 crore at best,” he said.