Broking firm ICICI Securities Ltd has had a rough ride from the day it debuted on stock exchanges in April 2018. Investors have given a cold shoulder to not just its stock but, from the looks of it, also its platform.

ICICI Securities reported a net profit of ₹101.2 crore in the December quarter (Q3), which is 34% lower from a year ago. Revenue fell 18% from a year ago, dragged by a lacklustre performance in all segments. The company makes money every time customers use its platform to trade or buy investment products off its shelves. 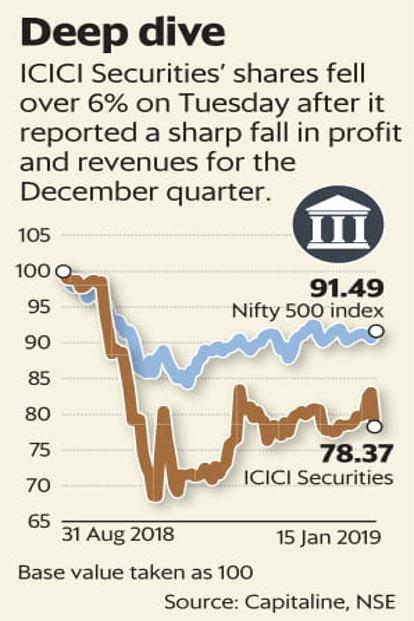 Broking has a lion’s share of total revenues and therefore, the 17% fall in brokerage revenues contributed to the drop in overall revenues. Recall that equity markets were roiled by the liquidity crisis in the non-banking finance space in September and October. Since these volatile times gave retail customers cold feet, ICICI Securities saw its retail brokerage slip, while business from institutions grew a bit.

The company’s distribution business struggled as well, with revenue here coming 11% lower than last year. But the blame for this can be partly laid at the doors of the market regulator for banning up-fronting of distribution commission, and lowering expense ratios. The impact of this twin blow will be felt even in the coming quarters and the ICICI Securities management has guided 25-30% decline in distribution yields from FY18 levels, according to HDFC Securities Ltd.

The silver lining for ICICI Securities was that average daily trading volume continued to remain robust, providing some visibility on earnings from its broking operations.

What is in store for the firm in the coming quarters?

The outlook for the brokerage firm is not sanguine. ICICI Securities needs to diversify its revenue but it had little success in the past quarter. That said, distribution income from insurance is expected to be better in the final quarter of FY19, according to HDFC Securities.

But prospects for the stock are not encouraging. It has halved from its initial public offering (IPO) price, underperforming the Nifty 500 index and its closest listed peer Motilal Oswal Financial Securities Ltd.

ICICI SECURITIES: Not just a broker! Re-engineering the business model