The Budget announcement of long term capital gains (LTCG) tax on equity investments has made returns from unit-linked insurance plans (Ulips) more attractive. The investment component in a Ulip works like a mutual fund, but with a different cost structure. As it has a tiny wrap of insurance, it is guided by different income-tax rules. As per section 10 (10D) of the income-tax Act, if the sum assured in a life insurance policy is at least 10 times the annual premium, then proceeds from the policy—maturity or early surrender—are tax free, keep in mind Ulips come with a lock-in of 5 years. Death benefit is tax free. This is a plus for Ulips, in view of the proposed LTCG tax of 10.4% on equity investments through mutual funds. Read more about it .

Unlike mutual funds, where all the costs are packed in one total expense ratio (TER)—which is levied evenly over the years and is reflected in the net asset value (NAV)—costs in Ulips are front-loaded and come under different costs heads. Its premium allocation charge is a straight deduction from the premium you pay. The remaining money is invested and the other costs are deducted from this. Fund management charge, which is capped at 1.35% of the fund value, is reflected in the net asset value (NAV); but mortality costs and policy administration costs are deducted typically by cancelling the units. “Costs are easier to understand and explain in a mutual fund because it’s one number and the NAV reflects this cost. But in the case of a Ulip, it’s difficult to explain or compare costs in the absence of a single expense ratio,” said Kaustubh Belapurkar, director-manager research, Morningstar Investment Adviser India Pvt Ltd.

As per Srinivasan Parthasarathy, senior executive vice president, chief actuary and appointed actuary, HDFC Standard Life Insurance Co. Ltd, Ulips too can adopt a single expense ratio structure, provided regulations are relaxed. “If this cap (fund management charge at 1.35%) were to be widened a bit, then it is possible to pack all costs into one charge. Mortality costs are based on individual’s profile, so they will have to stay outside this charge,” he said.

The difficulties in knowing the costs of Ulips are, to some extent, addressed by the cap on reduction in yields (RIY) that define the extent to which costs can drag down the returns: the difference between gross yield and net yield can’t be more than 2.25% on maturity for a policy with a duration of more than 10 years; and for less than 10 years, this difference can’t be more than 3%. However, a pure RIY comparison doesn’t factor in the mortality cost (which can hurt your investments at higher ages and sum assured), taxes and costs of guarantees so look at benefit illustration.

After 2010, Ulip costs were rationalised, making them more efficient than mutual funds over the long term—from a cost perspective. The LTGC tax has widened this gap. To illustrate this, let’s take a Type-2 Ulip, that returns the sum assured and fund value on death of policyholder: a 35-year-old who pays an annual premium of Rs5 lakh for sum assured of Rs50 lakh and policy term of 20 years gets around Rs1.99 crore. If he had bought a term plan for the same amount of assured and invested the rest of the money in a mutual fund, assuming the same fund performance, he would get about Rs1.89 crore.

Add to this the LTCG tax of 10.4% and the final corpus is around Rs1.80 crore (see table). For mutual funds, we have assumed a TER of 2%, but if you opt for direct plans, a lower TER could change the equation. However, due to their front-loaded charge structure, Ulips continue to be at a disadvantage on early liquidity. 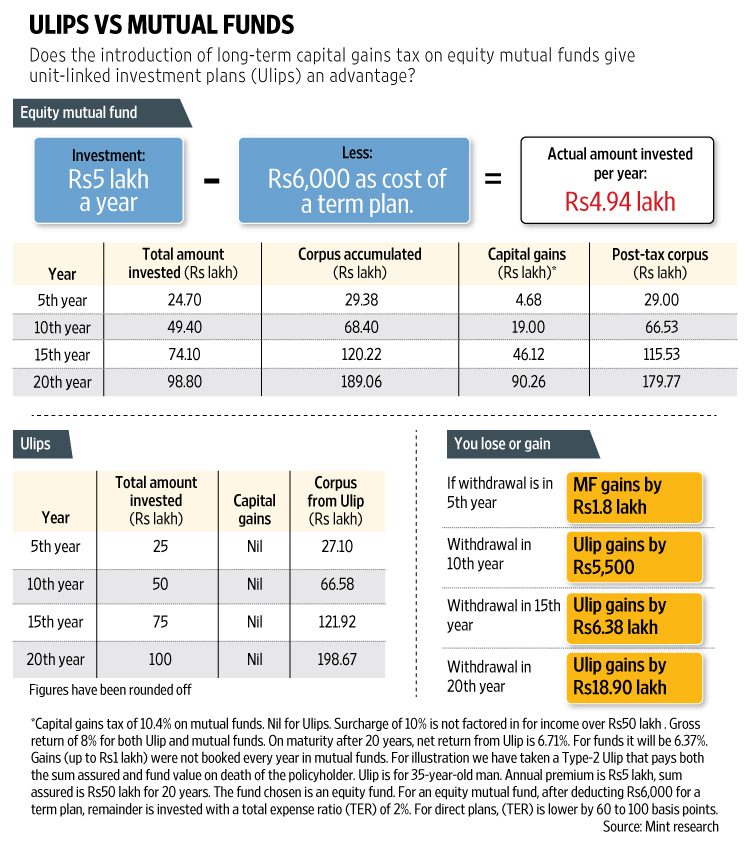 We compared the numbers on early surrenders in 5th, 10th and 15th year: Ulips took the lead from 10th year. “Ulips have come a long way in being cost-efficient and adopting better disclosures. But from a cost point of view, Ulips serve long-term goals so longer the term the more cost-efficient a Ulips gets,” said Puneet Nanda, executive director, ICICI Prudential Life Insurance Co. Ltd. Disclosures in Ulips have also improved, with insurers now required to disclose monthly performance of the fund over 1 month, 6 month, 1 year, 2 years, 3 years, and since inception; along with performance against the benchmark index for corresponding periods. However portfolio disclosure is limited to top 10 holdings under each asset category.

Ulips may have become better but financial advisers are concerned about their lack of flexibility. Suresh Sadagopan, founder, Ladder7 financial advisories, said, “If somebody has chosen to invest in a large-cap fund and it is underperforming, the investor will have to exit the Ulip and also let go of the insurance cover because the policy will not have multiple large-cap funds to choose from. Or they need to move to another category like mid-cap funds, which was not what they wanted in the first place.” And, cheaper investments like index funds and exchange traded funds are also there, which can absorb the loss from capital gains tax. Thus, “Keeping the need of insurance and investment separate will continue to make sense,” said Shyam Shekhar, founder, iThought.

Ulips may have come a long way but convenience always comes at a cost. Ulips are front-loaded and lack portability; so keep this in mind before you invest.

And if you do pick a Ulip, don’t surrender it unless the fund is performing badly on a consistent basis.