New Delhi: Federal investigative agencies swung into action to probe a fraud of around Rs11,400 crore in Punjab National Bank (PNB) and seized gold, diamonds and precious stones worth around Rs5,100 crore from 17 premises of Nirav Modi and Gitanjali Gems, but the main individuals named as being involved in the case by the Central Bureau of Investigation (CBI) seem to have left the country.

Meanwhile, the state-run lender said it would honour all “bona fide commitments” to other banks, although it stopped short of accepting the entire liability of the fraud, pointing out that matter was under investigation. Still, this is likely to address contagion fears that had spooked banking circles. 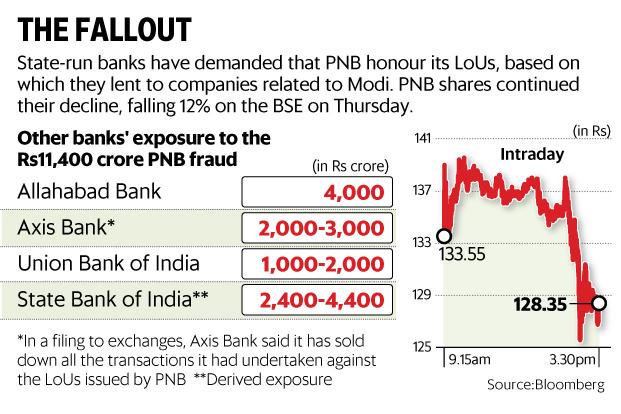 The Enforcement Directorate (ED), which conducted the raids in Mumbai, Delhi and Surat, has written to the ministry of external affairs to revoke the passports of all named in the case, an officer at the agency said on condition of anonymity. The Central Bureau of Investigation (CBI) had already issued a lookout notice for Modi, his wife, brother and his uncle, Mehul Choksi of Gitanjali Gems, on 4 February, soon after the fraud came to light, albeit as a Rs283 crore one.

Officers at CBI investigating the case said Modi left India on 1 January, a month before PNB’s first complaint to CBI on 29 January. It filed a second complaint this week. His brother Nishal Modi, a Belgian citizen, also left on 1 January, one of the officers said. Modi’s wife Ami, a US citizen, left on 4 January and Choksi on 6 January. “All left with their families,” the officer added.

“We at Gitanjali Gems are not aware of any such raids or visits by the ED as of now,” said a spokesperson for the company. “Gitanjali Gems has not had any ‘unauthorized’ dealings with PNB or its officials. All allegations being directed at us seem premature considering that the matter is still under investigation.”

On Wednesday, PNB stunned the nation with the disclosure that it had discovered more fraudulent transactions dating back to 2011 involving Modi and some of his group companies, perpetrated by some of its employees at a Mumbai branch.

The fraud pertains to issuance of letters of undertaking (LoUs), essentially guarantees, to three companies associated with Modi by errant PNB employees. That enabled these companies to raise buyer’s credit from international branches of other state-run banks. These LoUs were not recorded in the bank’s books or in the core banking system but has left PNB open to claims from other banks.

Another CBI officer familiar with the matter said PNB had issued around 150 LoUs involving Rs6,400 crore to companies promoted by Modi and more letters, for around Rs4,000 crore to Choksi’s companies.

According to Bloomberg News, Allahabad Bank has exposure of around Rs4,000 crore to the PNB fraud, while Union Bank of India has some Rs2,000 crore exposure. The report also said that Axis Bank Ltd has about Rs3,000 crore exposure, but the private sector lender clarified in a stock exchange notice that it has sold this exposure.

State-run banks have demanded that PNB honour its LoUs, based on which they lent to companies related to Modi. In a caution notice sent to chiefs of 30 banks on Tuesday, PNB had written that overseas branches of these banks did not share any document or information at the time of extending buyers’ credit to the companies. It also said that these banks violated Reserve Bank of India rules.

“If the investigation process says it is our liability, then we will accept it,” PNB’s managing director and chief executive officer Sunil Mehta said at a press conference on Thursday. When asked how these fraudulent transactions escaped the notice of auditors, Mehta said these LoUs were issued using the SWIFT messaging system but without making any corresponding entries in the bank’s books, due to which it escaped notice.

He added that with the raids and seizure of assets being carried out, a good portion of the amount could be recovered. He also said that the fraud was confined to only one branch and was not widespread.

According to Mehta, Modi has approached the lender with a vague repayment plan, and the bank has asked him to come up with a concrete repayment plan.

The ED on Thursday registered a case under the Prevention of Money Laundering Act.livemint