Just when Punjab National Bank(PNB) was hoping to come out of the woods with its improved non-performing asset (NPA) ratio, a fraud of about Rs 11,360 crore is likely to pinch the bank’s financials, capital ratios and ratings in this quarter.

Wednesday saw the investors of the second-largest government-owned bank lose Rs 3,900 crore worth of wealth in a single day, as the share price reduced Rs 16.85 (10.4 percent) to end at Rs 144.85 per share on NSE.

This after PNB made a shocking revelation of detecting fraudulent and unauthorised transactions worth USD 1,771.69 million (approximately Rs 11,360 crore) in one of its Mumbai branch

The development is likely to have an impact on the bank’s March quarter profitability and/or income depending on the accounting loss and its capital strength which might look like a complete erosion of the capital it received from the government.

“Yes, they (Punjab National Bank) got capital infusion from the government, and did a QIP, so whatever positive sentiment was built has been washed off with this…. There is a possibility of it going to other banks but then with the magnanimity of this fraud, it needs to be seen,” Karthik Srinivasan, group head for Financial Sector Ratings, ICRA.

For this year, PNB will receive Rs 5,473 crore as capital infusion from the government through a mix of recapitalisation bonds and direct infusion. The bank has also received Rs 1,231 crore by diluting its holding in PNB Housing Finance Co.

The fraud effectively nullifies any positives from the government’s capital infusion plan.

Last week, PNB’s managing director and chief executive officer Sunil Mehta said that the bank will look to raise more money from sale of non-core assets. The capital adequacy of the bank was at 11.58 percent at the end of December 2017. 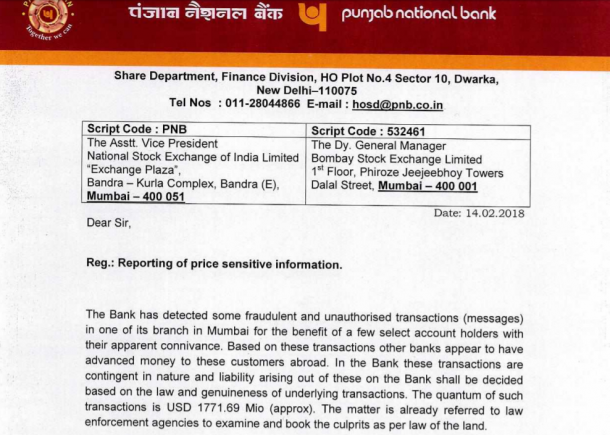 According to Srinivasan, “The amount is quite substantial even in absolute terms for a bank as big as PNB to absorb it…So our committee will meet PNB and decide what action will be required. What kind of loss the bank needs to bear, whether they will recognize the entire fraud now or whether there is any scope for recovery from it. We will wait for more clarity from the bank to decide on the ratings revision.”

Udit Kariwala, senior analyst, financial institutions at India Ratings, also said, “We are reviewing the impact of this on the bank. As of now, we’re monitoring the situation closely and based on the impact it may cause on the equity or profitability or whether it had a big dent or not, we will take a call.”

Assuming even 50 percent of the amount does not get recovered, the bank may have to take a hit on its profitability or other income depending on the nature of the fraud which is still unknown.

In a statement, PNB said, “The Bank has detected some fraudulent and unauthorised transactions (messages) in one of its branch in Mumbai for the benefit of a few select account holders with their apparent connivance. Based on these transactions other banks appear to have advanced money to these customers abroad. In the Bank these transactions are contingent in nature and liability arising out of these on the Bank shall be decided based on the law and genuineness of underlying transactions. The quantum of such transactions is USD 1771.69 Mio (approx). The matter is already referred to law enforcement agencies to examine and book the culprits as per law of the land.”

Previously, on February 5, PNB had said in a statement that some preliminary investigations had showed that it had come across suspected fraud by a jeweller for acquiring fraudulent letters of undertaking worth Rs 280 crore. It is not yet clear on the link of this fraud to the Wednesday’s announcement.