It also gave a 15-day deadline to state-run banks to take pre-emptive action, identify and address operational and technological risks, and adopt best practices to tighten their systems. 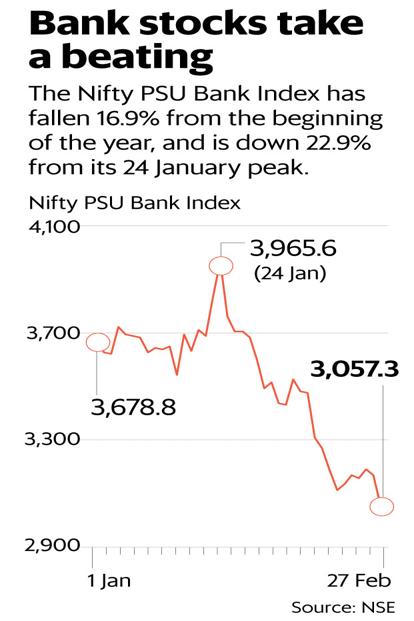 The government also stressed the need for accountability of the top management of banks and directed them to detect frauds and wilful defaults as per the Reserve Bank of India (RBI) guidelines, and to refer the cases to the Central Bureau of Investigation (CBI).

While this could pose an operational challenge to the state-owned banks, in the process the Union government has signalled a toughening of stance and a sense of urgency in containing any fallout from the Rs12,636 crore fraud allegedly perpetrated by jeweller Nirav Modi on PNB.

These banks will be required to scrutinize a large number of accounts—no estimate was immediately available. The gross non-performing assets (NPAs) of state run banks is estimated at nearly Rs8 trillion.

“Examining all NPA accounts of more than Rs50 crore maybe a bit unmanageable for banks and will add to the regulatory compliance cost. It would have been better if the threshold was higher,” said Deepak Bhawnani, chief executive of Alea Consulting. “To mitigate future fraud, it is important for banks to check if the guidelines in place are followed at the branch level.”

In cases where there is suspected money laundering or violation of foreign exchange management, banks have been asked to involve the Enforcement Directorate and directorate of revenue intelligence.

Chief vigilance officers of banks have been asked to work with CBI for complaints on frauds exceeding Rs50 crore. Banks have also been asked to seek a borrower status report from the Central Economic Intelligence Bureau once an account is declared an NPA.

The trigger for the government’s diktat comes in the aftermath of the PNB fraud. The bank had initially estimated the contingent liability at Rs11,400 crore, but increased it by an additional Rs1,300 crore in a late-night filing to the stock exchanges on Monday, leading to its stock price plunging more than 12% on Tuesday.

The scam put the spotlight on failures in systems and processes in PNB as well as in other banks.

A few bank officials in collusion with the group firms of these jewellers issued letters of undertaking (LoUs) to the latter through the SWIFT messaging system without recording them in the bank’s books. These LoUs were then used to borrow from overseas branches of other banks. Other banks, too, did not do adequate due diligence while granting the loan.

Rajiv Kumar, secretary, department of financial services, explained the framework for timely detection, reporting and investigation of high-value bank frauds as well as the time frame for banks to strengthen their systems on Twitter.

A group of executive officers and chief technology officers have been tasked to prepare a blueprint to ensure the banking system’s preparedness for the operational and technological challenges. Further, they have been asked to look into best practices and arrive at a minimum acceptable standard.

Bank boards will have to assign clear accountability to senior functionaries for implementation and compliance.

RBI has already directed banks to integrate their SWIFT systems with their core banking systems by April end.

Recently, finance minister Arun Jaitley had questioned the role of auditors and the top management of banks for their failure to detect the scam. Further, in a veiled reference to RBI, he had pointed out supervisory lapses and the need to ensure that this does not recur.livemint

Fiscal deficit looks stretched; spending to be curtailed in March