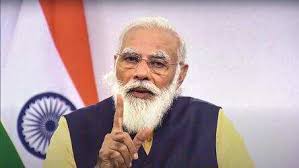 Prime Minister Narendra Modi, campaigning in Bihar’s Mithila region today for the ongoing election, referred to the Ram temple in Ayodhya as he outlined his government’s work and his coalition’s promises for the state.

Addressing a joint rally with Nitish Kumar on his second day of campaigning in Bihar, PM Modi began with praise for his critic-turned-ally but his comments on Ayodhya were perceived by many as a veiled dig at him.

The PM said “Ma Sita” (Lord Ram’s consort) would look with happiness upon her birthplace Mithila as well as Ayodhya.

“After centuries of penance, finally a grand Ram Temple is being built in Ayodhya. Those in politics who used to ask us for a tareekh (date), they are compelled to applaud. This is the identity of the BJP, the NDA – what we say, we do,” the Prime Minister said.

His comments, many said, raised memories of Nitish Kumar’s criticism of the BJP in 2015, when he was still partnering Lalu Yadav and the Congress. “BJP and RSS people keep saying – Ram Lalla hum aayenge, mandir wahin banayenge, par tareekh nahin batayenge (Ram Lalla we will come, build a temple there, but won’t give a date),” the Chief Minister had remarked, taunting the BJP.

But moments before the Ayodhya comment, PM Modi had lavish praise for Nitish Kumar. “In the last 15 years, Bihar has progressed under Nitish-ji’s leadership,” he said, calling him “Bhaavi Mukhyamantri” (prospective Chief Minister) and crediting him with Bihar’s economic turnaround.

Centre-Farmer Talks Inconclusive Again, Next Round On Saturday