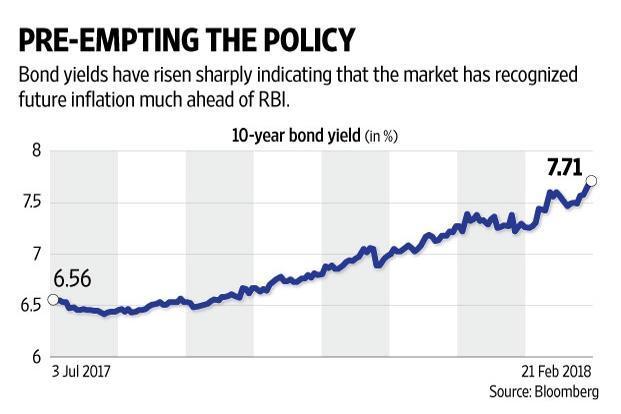 It bears repeating that retail inflation is well above the Reserve Bank of India’s (RBI’s) medium-term target of 4% and there is an outside chance it may breach the upper tolerance level of 6% in the coming months.

That would seriously imperil RBI’s and the monetary policy committee’s (MPC’s) credibility. History is witness to what loss of credibility can do. But barring Michael Patra, the central bank executive in charge of monetary policy, none from the six-member MPC has said so categorically.

To their credit, every member has stressed on the effects of the government’s abandonment of fiscal frugality on inflation. A fiscal deficit target of 3.3% along with the promise of higher minimum support prices and the customs duty hikes will ensure that rising inflationary pressures get entrenched.

Also, the fiscal slippage comes at a time when drivers of inflation are on course to put pressure on prices. Global oil prices are rising, the food price fall has reversed and core inflation remains sticky. A recovering global economic growth will add to demand pressure as well. When governments breach budgets and overspend, the cascading effect is a breach on every householder’s budgeted spending, as cost of living goes up.

All of this is copiously referred to by members in the minutes. Chetan Ghate calls for laser-like precision in watching inflationary outcomes, Ravindra Dholakia replaced his dovishness with the need to maintain a careful watch over inflation. Both governor Urjit Patel and deputy governor Viral Acharya emphasize the need to be on guard.

Patra of course goes a mile ahead to ask for a rate hike right away. He says a vicious spiral of rising input costs, fuel prices and inflationary expectations would endanger the mandated target. His solution is logical—a probable breach of the 2-6% band warrants a pre-emptive rate hike as monetary policy is forward looking, rather than reactive.

So why are the other members stepping on eggshells?

Acharya and Patel point out that economic growth and investment revival is still nascent and a rate hike at this juncture would kill it prematurely.

Additionally as always, members differ on their assessment of the output gap. They therefore did not want to press the rate hike button yet.

It is clear that worries over inflation that began bothering MPC a year ago are now full blown. Much of the blame lies with the government and this too has been acknowledged by members.

But central banks always tend to err on the side of caution and RBI, along with its six-member rate-setting committee, is no different.

Bond yields have already risen over 100 basis points, pricing in the reality of quickening inflation. In Patra’s words: “Fixed income markets are telling us that we have fallen behind the curve.”livemint