Global equity markets are seeing heightened volatility due to the risk of a global trade war. Benchmark indices of almost all the countries have come off since February-end when US President Donald Trump first threatened to impose sanctions on imports of steel and aluminium.

Even markets such as India, despite low exposure to the US economy and their stock markets, has seen high turbulence due to the risk-off sentiment among overseas investors created by the trade war fears.

Analysts see the selling pressure persisting in the week ahead as the Dow Jones index of the US plunged 2.3 per cent and slipped into correction territory on Friday. The index had dropped as much as 3.1 per cent intra-day on Friday after the US administration said it was weighing tariffs on additional $100 billion worth of Chinese imports. A Chinese commerce official promised to fight back with a “major response”.

Experts say markets are eyeing two key events this week. These include the renegotiations of the North American Free Trade Agreement (Nafta) and key speech by Chinese President Xi Jinping on Tuesday. Amid the deteriorating relations between the US and China, the markets are likely to take cues on any references made by Xi to the trade dispute with the world’s largest economy.

Tensions between Beijeng and Washington have been on the boil after US last week released a list of 1,300 products from China to be targeted with higher tariffs to curb misuse of US intellectual property. China had responded by announcing its plan to impose steep tariffs on $50 billion of US imports such as soybeans, airplanes and cars. The latest turbulence in the market was caused by US decision to up the ante against China with the $100-billion tariff threat. 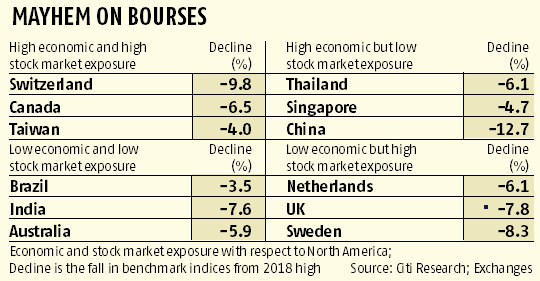 “Trump is proposing another $100 billion of Chinese imports to be subject to tariff hike. Our base case remains that a negotiated solution will be reached, but the extra $100 billion raises the risks if negotiations fail,” said Shane Oliver, head of investment strategy, AMP Capital.

A 10 per cent rise in trade costs could lower global GDP growth by 100 to 150 basis points, says Citibank in a report quoting estimates by the Organisation for Economic Co-operation and Development (OECD).

Markets such as Brazil, India, Australia and South Africa, whose share of exports to the US is low, are also seeing their stock markets getting punished amid flaring up of tensions between the two largest economies.

“For India, we believe minimal impact of the moves thus far, but risks if these escalate and global growth gets hurt. Also, global risk-off could hurt Indian markets given that valuations are still at a premium,” said Citibank analysts Surendra Goyal and Vijit Jain in a report dated March 25.

The Indian market is currently down 7.6 per cent from the 2018 highs. Part of this correction is due to domestic factors, such as the banking fraud, political uncertainty and rising oil prices. However, the recent weakness is largely on account of global trade tensions.

The three largest exports from India to the US are jewellery, pharmaceuticals and textiles. Pharma and IT services are the two key sectors listed as high risks due to possible trade actions from the US. In an event of the escalation of the trade war, stocks in these two sectors, along with metals, could see the biggest correction, say analysts, who suggest domestic cyclicals and consumer stocks could be better plays at this juncture.

While trade will dominate the markets this week, investors will be hoping the March quarter result announcement will give them some reason to cheer.business-standard