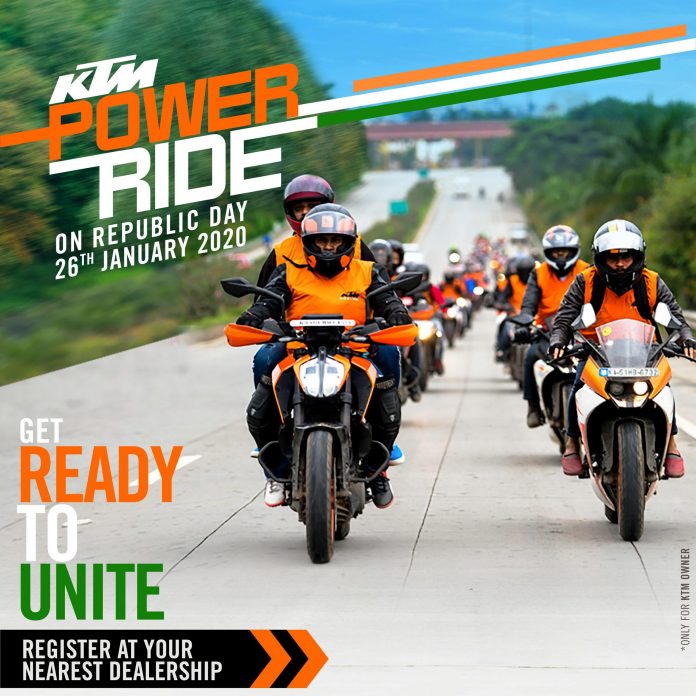 The second edition of the KTM Power Ride will see thousands of proud KTM owners participating in breakfast rides across the country which will be taking place simultaneously in 100+ cities. The rides will commence from key dealerships at 7 am in the morning and the KTM owners will conglomerate at a pre-decided location to celebrate the Republic Day with the hoisting of the National Flag.

KTM plans to have one Power Ride every quarter to bring this growing community of KTM enthusiasts together.

In this edition of the KTM Power Ride, the participating KTM owners, also stand a chance to win exciting goodies in the KTM Power Pic contest, where the riders will be posting their power-packed images on the ride. The selected entries will be gratified.

Additionally, at cities – Mumbai, Pune, Delhi & NCR, Hyderabad, Bengaluru, the KTM riders will witness an exclusive launch of the  KTM 390 Adventure and have a chance to test ride the same.

Speaking on the occasion Sumeet Narang, President (Probiking) at Bajaj Auto Ltd. said “Over the years, KTM India has built a strong community consisting of thousands of KTM owners and thus, KTM Power ride is an apt platform for the community to come together. We had a great response to the inaugural KTM Power Ride during Independence Day 2019 and expect the ride during this Republic Day to be even better”