The promoters of Hotel Leelaventure that owns and manages Hotel Leela & Resorts might cede majority stake in the hospitality company.

This seems possible with a proposed share sale to JM Financial Asset Reconstruction Company (JMFARC), for conversion of debt into equity. After the transaction, which will take place in tranches after requisite approvals, JMFARC will control 75.2 per cent in the company, against 26 per cent it did at the end of March quarter, while promoter’s stake will drop to 15.9 per cent from 47.2 per cent in the same period. The move marks yet another effort by the promoters to turn around the loan-heavy company, struggling for almost a decade amid high fixed cost, pricing pressure and increasing competition from international hotel chains in India.

On Monday, the board of directors approved an enabling resolution for issue of up 1.25 billion equity shares of a face value of Rs 2 each, in one or more tranches, it said in a notification to the stock exchanges.

The Leela at present has three to four major investor proposals being considered by JM Finance, said Vivek Nair, chairman and management director of Leelaventure. He said the conversion of debt into equity “is indeed very important to pare the overall debt to sustainable levels”. Consolidated debt at the end of March was Rs 36.62 billion.

The proposed share sale will have to be approved at the annual general meeting, scheduled on August 20. Nair said this would not lead to any change in the management. “We are confident at these well-endowed funds participating in the refinancing plan. Thus, we do not anticipate promoter stakes to be diluted and, consequently, not leading to any changes in the management,” he said.

To issue further equity shares to JMFARC, the board also approved an increase of the authorised share capital from Rs 2.6 billion to Rs 4.6 billion, comprising two bn equity shares of a Rs 2 face value each and six million redeemable preference shares of Rs 100 each; also, a consequent change in the capital clauses of the Memorandum of Association.All subject to approval of the shareholders, it told the exchanges. 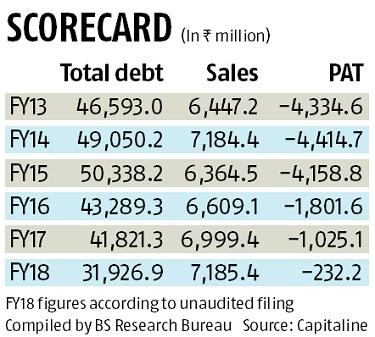 Banking sources said JMFARC was expected to subscribe to the shares in stages over a few months. Generally, ARCs look for better valuation for their exposure, to benefit from holding and supporting an entity while it passes through tough times.

Meanwhile, Bank of Baroda has put on sale its exposure to Hotel Leelaveture, worth Rs 464.5 million. This is a non-performing asset on its account books, says the lender.

The company had restructured its loans under the earlier Corporate Debt Restructuring (CDR) mechanism, with January 1, 2012, as the cut-off date. One of the conditions of that package was debt would be brought down by Rs 20.3 bn, by selling the Delhi hotel by end-March 2014. The company said a continuing recession in the segment had blocked this.

Mandeep S Lamba, managing director for the India hotels group at Jones Lang LaSalle Property Consultants said the sector was after six years of downturn finally coming out of the woods. Demand was now outstripping supply in most key cities.

Lamba says companies such as The Leela, which operate only in the luxury hospitality segment and only in metro or tier-1 resort locations, have seen fortunes changing substantially. They used high-cost capital to build new hotels and over the years have found it hard to service the debt, as the returns have not met market expectations.

“Their hotels performed exceedingly well in the bull run from 2005 to 2009. That performance could not be sustained when the global financial crisis hit the world in 2008 and India also witnessed its largest addition of hotel room supply from 2007 to 2015, causing hotel tariffs (rates) to drop significantly,” he explained.business-standard

Suspension of Trading in Debentures of Jhajjar Power Limited