Do 70.3 million people read Dainik Jagran or is it 18.9 million? Is Malayala Manorama ahead of rival Matrubhumi by 35 per cent or 48 per cent?In the answers to such questions lies the key to whether Indian Readership Survey (IRS) 2017, released on January 18 will take off or meet the same fate as the last two surveys. Its emphasis on total readership (in the last one month) is the first big indicator of the changes that the Readership Studies Council of India has made to ensure that the data is accepted by publishers. Total readership is usually three-four times more than the average issue readership (yesterday), the standard used by advertisers. The other changes are introducing three-day and seven-day readership measures, separate metrics for the main paper and its variants and scores of checks and balances that make the survey which covered almost 0.32 million Indians virtually tamper proof this time, say officials.So far, unlike in 2014, no publisher has filed a suit or raised a stink — even the ones that have fallen in the rankings. “We are very happy that the IRS is out and hope it comes out regularly and is tamper proof. If this gets stalled, that will be the end of it,” says Jayant Mathew, director, Malayala Manorama.Readership data is the currency used to buy and sell Rs 201 billion worth of ad space in newspapers and magazines. That is about two-thirds of the Rs 303.3 billion revenue the Indian print industry makes. Not having a metric plus demonetisation and GST have played havoc with balance sheets. “Data darkness for such a protracted period of time (four years) is unhealthy for any business, let alone such a large one as the print industry,” says Jaskaran Kapany, vice-president (marketing), Paytm. It is a significant spender on print with 15-30 per cent of its ad budget going to the medium. “Not having data was a huge problem. Because public perception was against print; digital was rising. There was no data to prove otherwise, so people assumed we were down,” says Girish Agarwal, director, DB Corporation.Print, however, was never down. Circulation, readership and revenues for Indian print have been growing consistently for the past decade and more. It remains the most profitable part of the Rs 1,262 billion Indian media and entertainment business. “Advertising growth was single digit without data, now we are hoping that growth perks up, we have something to talk about,” says Kamal Kumar Goenka, managing director, Neutral Publishing House, publishers of Prabhat Khabar.There will, it seems, not be a rebellion this time. “When we started a lot of groundwork was done to align publishers and ensure that they participated at all points,” says I Venkat, member Audit Bureau of Circulations. In 2012, the methodology behind IRS was overhauled completely, making it more tech-heavy and its reach wider. However, the results which came out in 2014 raised hackles all around because of errors in the data and allegations of tampering. That is when The Times of India, Anandabazar Patrika among others came out with adverts which cautioned advertisers and users against the IRS. From there to a 0.32 million sample and complete acceptance has been a long journey for the metric.But some of the changes are puzzling.Making sense of readershipIf you use total readership, there are over 385 million Indians who read a daily newspaper at some point in the last one month (in 2017) against 276 million in 2014 when the last IRS came out.

That is a massive jump of about 109 million readers or 40 per cent. While print has traditionally been a high growth industry, this number is fantastic when compared with Average Issue Readership (AIR), the standard metric buyers have used for decades. Going by AIR, dailies have barely grown 0.6 per cent over 2014 to 173 million.To understand how that makes a difference in actual reporting, consider that The Times of India has 13 million readers if you use total readership. But going by AIR, it has 4.76 million. If only AIR was considered, English newspapers would have shown an overall drop and Hindi and other languages would have shown some slowing down, say analysts.Is this then one of the soft compromises to keep publishers happy?Ashish Bhasin, chairman, MRUC and CEO Dentsu Aegis, doesn’t agree. “Planning is more dynamic and not everybody is reading a newspaper every day. So this gives planners the option of looking at whether you read the paper yesterday, in the last three days, seven days or the last month. They can choose to trade on whichever standard suits them. AIR is very much available,” says he. It is, but only to subscribers who are not allowed to share it with the media. “This IRS gives different dimensions to data, the user can decide which one to use. And, yes, it complicates selling because print now has to sell itself on multiple cuts of data,” says Agarwal.Kapany of PayTM is circumspect. “AIR (yesterday) is accurate and relevant for what advertisers can expect to reach on any given day. The two — AIR and total readership — serve different purposes.

AIR uses memory from day after reporting, while total readership does a month-long memorability. So total readership is an indicator of the maximum reach of the publication, while AIR is a measure for regular readers, and the advertiser puts money based on probability of a regular habit and hence the expected view of the ad on any given day,” he says.“Since print is an expensive medium, advertisers need to be prudent and ensure that we get a fair indication of the reach of our ads. Having said this, it’s true that the print reading habit has changed and the frequency is reducing. It will be interesting to see how total readership, last three days/seven days stacks up against AIR.”Wait then for the next few weeks to know which number matters most to advertisers. 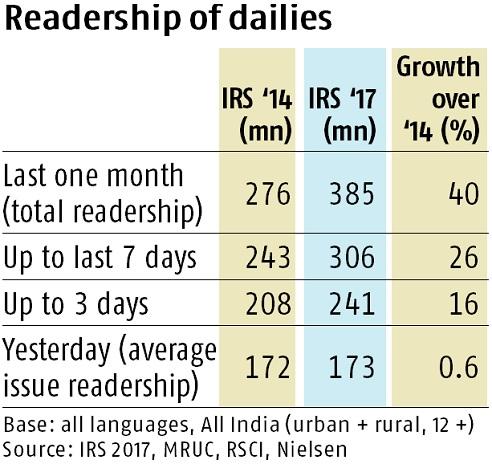